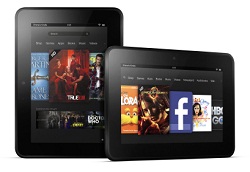 Amazon has launched a range of new tablets in its Kindle line, including a high-end LTE-powered flagship device to compete with Apple’s market-leading iPad.

The retail giant used a high-profile event yesterday to unveil the Kindle Fire HD tablet family, alongside an updated version of the existing Kindle Fire tablet – which it claims has captured 22 percent of US tablet sales in just nine months. It also launched a new version of the Kindle e-reader called the Paperwhite, but rumours of an Amazon smartphone proved unfounded.

A 7-inch version of the Kindle Fire HD will cost US$199, while the existing Fire tablet has been reduced to US$159. These two devices will be available from next week.

“We’re taking on the most popular price point for a tablet, US$499, but doubling the storage and incredibly, adding ultra-fast 4G LTE wireless,” said Amazon CEO Jeff Bezos. “Kindle Fire HD is not only the most-advanced hardware, it’s also a service. “

According to recent figures from IDC, the iPad accounted for accounted for 68 percent of global tablet shipments in the second quarter, while Amazon captured 5 percent. But competition in the market is hotting up with major new products such as Google’s Nexus 7 and Microsoft’s Surface entering the fray.