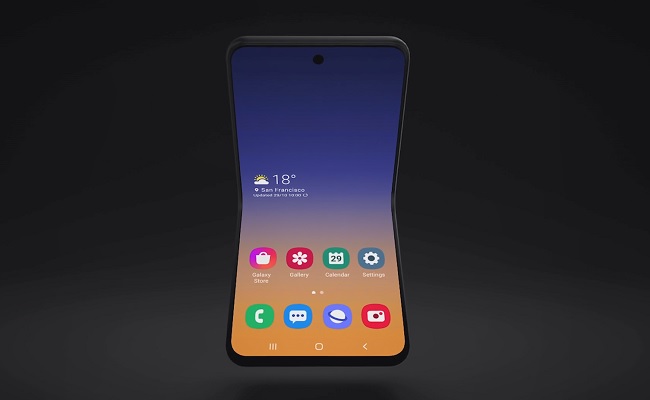 Samsung revealed it is working on a second foldable device despite facing hurdles with its Galaxy Fold, as it took the wraps off updates to its One UI interface and upgrades involving its Bixby assistant at its annual developer conference.

The company provided scant detail about the forthcoming device, but displayed a concept image showing the device follows a clamshell form factor rather than the horizontal configuration of the Galaxy Fold.

Attendees of #SDC19 got a sneak peek at a brand new form factor Samsung is exploring for the foldable category of devices. #SamsungEvent pic.twitter.com/rGtpvNj0SJ

Hyesoon Jeong, head of Samsung’s framework R&D group, said the device will use the same display technology pioneered in the Galaxy Fold to make a device that is “more compact”.

“This brand-new form factor that we’re now exploring will not only easily fit in your pocket, but it also changes the way you use your phone, even when you take photos and videos.”

Samsung unveiled the Galaxy Fold at its developer conference in November 2018, originally aiming for a launch in April, but this was delayed after problems with the display. The device went on sale last month.

UI update
The vendor also unveiled the second iteration of its user interface, One UI 2, which it is expanding beyond its smartphones and foldables to tablets and smartwatches.

Updates include a reconfigured experience which reserves the top half of the screen for notifications and the bottom half for touch interactions, making it easier for users to reach relevant controls with their thumbs. Additionally, pop-up notifications were minimised to reduce distractions while users watch video or play games; icons were refreshed with animation and brighter colours; and a dark mode theme was extended to include the home and lock screens.

A beta version of One UI 2 launched earlier this month, with an official release due in “in the next few months,” Jeong said.

Bixby
New tools for Bixby developers will make it easier for them to create and scale new skills (which Samsung calls “capsules”) on the AI platform, it said.

For instance, fresh Bixby Templates will offer developers an established starting point so they don’t have to write new capsule code from scratch. Developers will also have the ability to tag capsules with Natural Language categories, allowing Bixby to suggest relevant offerings when users search for certain terms.