Ericsson admitted its numbers for the fourth quarter were “far below our long-term ambition”, as it revamped its corporate structure and revealed the future of its media businesses.

“The focus during 2017 has been on reshaping overall strategy and on improving company structure and performance…We are fully committed to our plans and our targets and expect to see tangible results of our turnaround in 2018,” Borje Ekholm, president and CEO said. 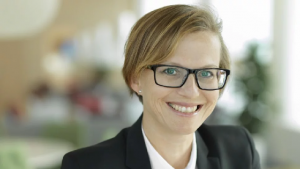 Helena Norrman, chief marketing and communications officer (pictured, left), told Mobile World Live: “Despite the results, we are seeing a number of positive signals, especially on the networks side, which is mainly radio.”

“Obviously the Chinese market is coming down after extremely high volumes, that’s a clear trend and we’ve been seeing that for some time. But if you look beyond that, the discussions around 5G and the interest in the 5G portfolio is leading to increased traction in 4G as well,” she said.

“When you start discussing new technologies, sometimes you can end up in a situation where there is a hesitation in investment in current technologies. But that is not what we are experiencing right now.”

Ericsson is working with private equity company One Equity Partners to “establish Media Solutions as a leading independent video technology company with strong and committed financial support driving continued investment in innovation and growth”. The vendor will retain a 49 per cent stake.

“It has been our intention from the start to keep a share of that business, because it is important to our customers, and they largely serve our big customers, and media solutions and media software is important to them. So it makes a lot of sense for us to continue to play a role in that market and have a stake in that. We’re pleased with what we are announcing today,” Norrman said.

With regard to Red Bee, Ericsson said “the bids received did not reflect the value of the business”, and therefore no sale would take place.

“We got bids, but they weren’t good enough to represent the value of the business. In both Red Bee and Media Solutions, there has been really, really good work done during the year to improve the performances of those businesses, which were in quite heavy losses, but they are in much better shape now,” she continued.

Restructure
Ericsson created a new unit, Emerging Business, to “focus on innovation and new business development, with initial focus on IoT and within distributed cloud solutions”. Joining to head the unit is Asa Tamsons, from McKinsey & Co.

This unit will also house the CTO office and Ericsson Research.

Ulf Ewaldsson, current head of the Digital Services, is set to leave the unit, as it “undergoes significant transformation to create a profitable and strong offering in this strategically important area”. He will take on a role as advisor to Ekholm.

Segment performance
Sales in the networks business during Q4 2017 were down 14 per cent year-on-year to SEK36.2 billion ($4.6 billion), and operating profit halved to SEK1.6 billion. The sales decline was mainly due to lower LTE investments in mainland China and earlier completion of larger projects in Southeast Asia, Oceania and India, as well as the Middle East and Africa.

Operating profit was impacted by “additional provisions and customer project assessments” of SEK1.1 billion, as well as an SEK200 million asset write-down.

Ericsson said because of ongoing technology shifts in the portfolio, sales of legacy portfolio products and related services continued to decline, primarily in OSS, BSS and packet core. It noted SEK9.1 billion of costs related to asset write-downs, provisions and customer project adjustments.

In a statement, Ekholm said: “As previously communicated, our turnaround plan builds on stability, profitability and growth – in that order. The initial focus has been on stabilising both product roadmaps and challenging customer contracts. We have identified 45 critical or non-strategic customer contracts and the plan is to complete or exit approximately half of these contracts in 2018.”

Managed Services operating loss of SEK1.3 billion was up from SEK500 million in the comparable period, on revenue which declined 7 per to SEK6.2 billion. The decline in sales was a consequence of contract reviews and reduced variable sales in “certain large Managed Services Networks” contracts.

Ericsson said “as part of the focused business strategy, Managed Services has its full attention on turning the business around from the negative result in 2016, addressing low-performing operations and non-strategic contracts”.

Group numbers
On a group level, the company reported a Q4 net loss of SEK18.9 billion, compared with a prior-year loss of SEK1.6 billion, on revenue of SEK57.2 billion, down 12 per cent. Ericsson previously revealed it was writing-down SEK14.5 billion of assets (slightly more than stated earlier due to currency effects).