Intelligence Brief: How the IoT ecosystem stacks up

Recent weeks have seen interesting developments within the IoT ecosystem, coming from the likes of ARM, Google, Intel, Qualcomm and Samsung. It made me revisit ecosystem players’ positioning within the IoT value chain, having already looked at how operators are positioned.

The simple fact of the matter is the importance of partnerships and collaboration cannot be overstated in IoT. The point laboured time after time is that no one company can do it all, by which I mean provide an end-to-end solution spanning chipsets, application and system integration. Sounds pretty obvious, but it doesn’t mean IoT ecosystem players haven’t tried to become sole solution providers.

So, let’s take a look at how some of the top tech giants are positioning in IoT. For simplicity I’ve split IoT capabilities into devices, modules and chipsets, platform management, data analytics, cloud and security layers. 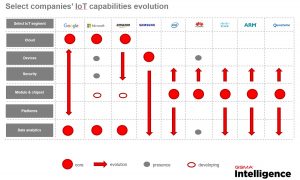 In essence, the boundaries between traditional technology/IT players and others are blurring as new business models in IoT emerge around data, analytics and, in a more broad sense, services. Companies are moving up and down the IoT value stack, aiming to capture the largest piece of the IoT revenue pie (see chart, click to enlarge – the red circle identifies the company’s core IoT capability, the arrows signify their expansion direction, and grey indicates areas of focus).

Just to remind ourselves how big this is, GSMA Intelligence forecasts revenue from IoT applications, and platforms and services (including cloud and analytics), will increase sixfold between 2017 and 2025, bringing in $137 billion and $754 billion respectively. In short, a rather attractive revenue opportunity.

Upping the software stack: Technology companies such as Google, Microsoft and Amazon are adding devices to their existing software stack. Google has been investing in machine learning (ML) and artificial intelligence (AI) for years and is already well positioned in the data analytics space. During its recent Google Cloud Next ’18 event, the tech giant announced initiatives aimed at moving analytics close to the edge or near the point of data generation: namely, Cloud IoT Edge (software for IoT gateway-class devices running Android Things or Linux) and Edge TPU (a chip specifically designed to offer ML inference on edge devices).

This is a pretty compelling proposition for the fast growing industrial IoT segments such as smart cities, oil and gas, utilities and manufacturing. I also can’t ignore Amazon’s Alexa, which has been a runaway success in the smart speaker market. For example, Ofcom figures show 13 per cent of UK households now own a smart speaker, of which 75 per cent are Amazon Echo models (which feature the Alexa assistant).

From the devices up the stack: On the other side of the spectrum, traditional manufacturers and OEMs including Cisco, Intel, ARM, Samsung and Qualcomm are augmenting their existing core capability, hardware (modules and devices), with platform and data analytics capabilities. These companies grow their current capabilities either organically or by acquisitions with the ultimate goal to move into AI.

But also they want to address the pressing issue that is IoT security.

For instance, Samsung has been expanding its capabilities up the IoT value stack to include platform management and data analytics, but also down the stack – launching ARTIK modules tailored for IoT and ARTIK IoT Security. Recently, the company committed to a KRW25 trillion ($22.3 billion) investment over three years in areas including IoT, AI and 5G.

Despite its bid for NXP Semiconductors falling through, Qualcomm’s optimism when it comes to the IoT opportunity shows no sign of abating. It expects $1 billion in revenue from IoT this year as its chips make their way into even more devices: with a total of more than 200 wearables and 1,300 different wireless headsets, earbuds and wireless speakers on the market.

Platform seems to be the only game in town when it comes to IoT: Platforms management (in which we include connectivity, device and application management) is an almost default position for any digital company with designs on the IoT market. Most recently, ARM announced its ARM Pelion platform to support its vision of 1 trillion connected devices by 2035. This stems from the acquisition of Treasure Data, an enterprise data management company which it dubbed “the final piece of our IoT enablement puzzle”, along with the integration of its Mbed IoT Device Management platform with the recent acquisition of Stream Technologies.

Last, but not least, if it ain’t working…let it go: Intel reported revenue of $880 million in Q2 from its IoT Group, a 22 per cent year-on-year increase equivalent to 5.2 per cent of overall revenue. However, in April 2018, a decade after the acquisition, Intel divested Wind River. Why? In the words of IoT Group leader Tom Lantzsch, it is a move designed to sharpen Intel’s focus on growth opportunities which align to Intel’s data-centric strategy.