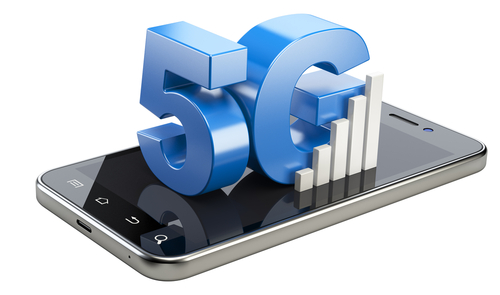 PARTNER FEATURE: Japan’s largest mobile operator NTT DOCOMO, INC. is gearing up for one of the world’s earliest and most high-profile 5G launches, targeting commercial deployment in time for the 2020 Summer Olympics in Tokyo. But behind the scenes the company is going to great efforts to ensure that a whole range of new markets benefit from its 5G strategy. Dr. Hiroshi Nakamura, CTO of NTT DOCOMO, talks about how to make 5G a reality.

A key takeaway from CTO Hiroshi Nakamura’s keynote appearance at Huawei’s Global Mobile Broadband Forum (MBBF) 2017 was that partnerships will be vital to 5G success. DOCOMO is working with an extensive list of partners, from mobile technology suppliers to railway companies and local governments in Japan.

The operator has been researching 5G technology since 2010, the same year it launched 4G. In the last three years it’s partnered with 13 technology vendors to test 5G across existing spectrum bands, such as 800 MHz and 2 GHz, and higher frequency bands like 3-6 GHz, 6-30 GHz and >30 GHz. Its network partners include Huawei, Fujitsu, NEC, and Mitsubishi Electric, and other partners include the systems solution vendor Panasonic, the chipset vendors Intel, Mediatek and Qualcomm, and the test and measurement providers Keysight Technologies and Rohde & Schwarz.

At MBBF Nakamura described its work with Huawei as “one of the most important partners we are working with,” referring to Massive MIMO technologies. “We have greater spectrum efficiency using Massive MIMO,” stated Nakamura, revealing that a test in Yokohama in the 4.5 GHz spectrum band achieved a maximum spectral efficiency of 79.82 bps/Hz at each cell site.

Aside from the technology trials with mobile network vendors, it’s DOCOMO’s work with partners outside of the traditional telco industry that is establishing 5G as a true revolution.

“5G is unique compared with previous generations because industries are already showing a big interest, even before commercial services are available,” commented Nakamura. “As an operator DOCOMO can provide 5G and AI technologies to the market to enable new services and new business models, but we also believe we cannot do that alone. We need partners to realise such new services. For example, automated driving will definitely require car manufacturer partners, VR will require partnering with content providers. Collaborating with partners is what is required. Co-creation for such new services is fundamental.”

5G trial sites
In May, 2017, DOCOMO opened a series of 5G trial sites which have seen the operator and partner companies collaborate in creating new services that aim to leverage 5G strengths such as low latency, ultra-high-speed, ultra large capacity and massive device connectivity.

“We opened the 5G trial sites to invite a lot of verticals to evaluate and help jointly create 5G use cases,” Nakamura explained. “We need to identify what kind of businesses we can create with our vertical partners.”

Nakamura said so far a variety of industries have come on board: car manufacturers, TV broadcast companies, construction companies, railway companies, security companies, image processing companies, printing companies, display companies and IT service companies. “These verticals have their own requirements and issues. We as an operator need to hear their voices to help create new services.”

Two of these use cases were highlighted by Nakamura in more detail. DOCOMO’s work with a TV broadcast company saw the broadcast company use large table-sized screens with viewers stood around the screens and interacting with the screen via augmented reality (AR) technology. “Using large images and AR we definitely require broadband communications. 5G is an exact use case for that demonstration,” noted Nakamura.

Meanwhile a construction company has teamed with DOCOMO to trial the use of remote-controlled vehicles that can be used in areas deemed unsafe for human work or where highly skilled drivers are unavailable. The vehicles are equipped with 4K and 8K cameras. “This requires high-speed and high-bandwidth data communication as well as low latency for the remote control,” reflected Nakamura.

AI’s role in 5G
With artificial intelligence (AI) as something of a buzzword in the industry right now, Nakamura is also convinced the technology will play a major role in DOCOMO’s 5G future. “I believe 5G and AI are core technologies for realizing such a new world and new lifestyles,” he stated. “AI also requires working with partners.” 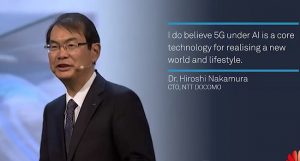 Nakamura outlined how AI can be used for two different purposes: as a “personal agent” to enhance people’s lifestyles, and for “social system optimization.”

As a personal agent, DOCOMO is using AI to improve its eCommerce service platform that has around 15 million customers. In June the operator went a step further by opening up its AI agent platform to partners. Nakamura said its AI Agent Open Partner Initiative means “partners can create their own agent and improve their business or create new services using our AI platforms.”

The initiative is device agnostic, “so our partners can use the AI agent devices as their choice.”

Nakamura claimed that a lot of partners are already showing support for the initiative and using it to create their own AI agent, including chipset company, price comparison website, department store chain, computer hardware manufacturer and machine tool manufacturer.

In terms of AI use cases for social system optimisation, Nakamura heralded the potential for vertical industries as “unlimited.” One agricultural use case highlighted by the CTO was the local government of northern Japanese city, which has used DOCOMO’s “deep learning” AI technology, incorporating photo images from drones, to overcome the problem of plant disease and insect damage in rice fields and pine forests.

A different example saw DOCOMO helps taxi drivers boost their income. Nakamura explained that the operator used AI technology and deep learning of population statistics to predict 30-minute future demand for taxis in certain locations. “The analytical results are sent to the driver who can go to specific areas to pick up their passengers. After three months of field tests we were able to increase each driver’s sales by about 1,400 yen per day, that’s around USD$12 to USD$13,” revealed Nakamura. “That’s another example of using AI for improving business.”

5G standardisation
NTT DOCOMO’s open approach to 5G also extends to official ratification of the technical standard. Earlier this year DOCOMO was part of a global push to speed up the standardization of 5G, with 3GPP agreeing to finalize the non-standalone New Radio standard by December 2017, well ahead of an earlier target of June 2018.

“DOCOMO will use this December’s first non-standalone spec for our commercial 5G services,” confirmed Nakamura in an interview at MBBF 2017. “We’re completely in line with 3GPP and 5G specifications.”

With less than 1,000 days before DOCOMO launches its commercial 5G service, it’s clear the operator isn’t embarking on this journey alone. As Nakamura concluded at Huawei’s MBBF event in London, “When thinking about services in the 5G era, the important thing is partnerships and co-creation with our verticals. We as an operator can enable the market, but we definitely require partnerships with them to create new services.”