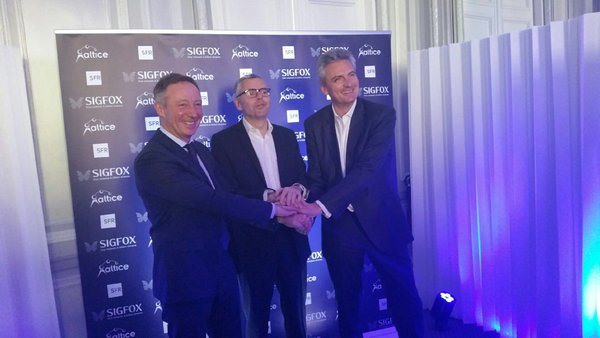 Operator Altice announced a deal to integrate Sigfox’s proprietary Internet of Things (IoT) network within its operations in France through SFR and across its global footprint, bucking a trend by its domestic rivals to deploy LoRA-based technology.

Sigfox, which raised $115 million in funding last year to extend the network, said the strategic alliance with the cable and telecoms group is designed to offer “complementary connectivity solutions starting today that democratise the IoT in all sectors of the economy”.

Sigfox’s Low Power Wide Area (LPWA) offering is currently one of many rival IoT technologies on the market. Other proprietary technologies (using unlicensed spectrum) include LoRa and Ingenu, while future 3GPP-backed cellular standards NB-IoT, LTE-M and EC-GSM will compete for market share once standardisation is fully complete.

The deal represents a major win for Sigfox in its bid to spread its network globally, with Altice building a strategy based on convergence in Western Europe (with operations in France, Belgium, Luxembourg, Portugal, Switzerland), the US, Israel, and overseas territories (the French Caribbean, the Indian Oceans region and the Dominican Republic).

Sigfox’s network is currently deployed in 14 countries, registering more than 7 million devices. Sigfox plans to cover more than 30 countries with the network by the end of 2016.

It is also significant as SFR’s two main rivals Bouygues and Orange have opted to use LoRA technology for their national LPWA deployments.

Michel Combes, the new COO of Altice, and chairman and CEO of SFR, said in a statement that the company is “convinced the IoT market is an opportunity to seize now”.

“We are talking about billions of connections. We share the same entrepreneurial vision with Sigfox and will to conquer new markets,” he said.

Sigfox maintained that its offer “would not compete with services offered by cellular operators”.

“Sigfox has always been convinced that IoT requires a new type of connectivity solution,” said Ludovic Le Moan, CEO at the company.