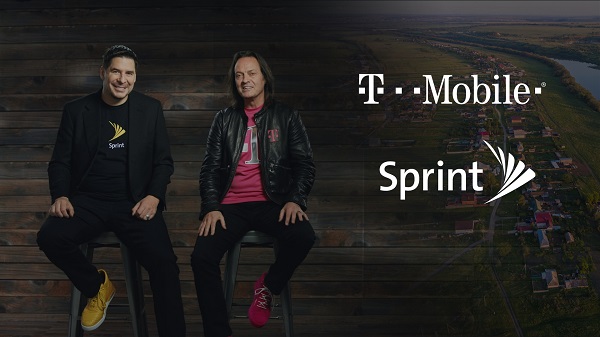 T-Mobile US and Sprint put an end to years of speculation, today (29 April) announcing plans to merge in an all-stock transaction worth $26 billion.

The combined company will operate under T-Mobile’s moniker with a home base in Bellevue, Washington, and will be led by T-Mobile CEO John Legere. T-Mobile COO Mike Sievert will also stay on board (as president and COO of the combined entity), and additional members of the new management team will be selected from both companies during the closing period.

Masayoshi Son, current SoftBank Group chairman and CEO (owner of Sprint), and Marcelo Claure, current CEO of Sprint, will serve on the board of the new T-Mobile.

According to GSMA Intelligence, T-Mobile and Sprint are the third and fourth largest mobile operators in the US, respectively, with a market share of 19 per cent and 12 per cent. Verizon leads the market with a 36 per cent market share, followed by AT&T (30 per cent). Today’s news would therefore create a new number two mobile operator in the US.

In a statement, Legere claimed the deal will “create a fierce competitor with the network scale to deliver more for consumers and businesses in the form of lower prices, more innovation, and a second-to-none network experience – and do it all so much faster than either company could on its own.”

The combined entity will have a market value of $146 billion.

Network
On Twitter, T-Mobile CTO Neville Ray said the combination of Sprint’s 2.5GHz holdings, T-Mobile’s 600MHz, and other spectrum assets will “create the highest capacity mobile network in US history”.

“This thing will be something that no one has ever seen,” he added on a press call, dubbing it “the mother of all networks”.

During the press call, Sievert said the combined network will have 85,000 macro sites and 50,000 additional small cells.

But the pair are aiming to get their hands on even more spectrum, noting they will seek a waiver from the Federal Communications Commission (FCC) to bid in the upcoming mmWave spectrum auction together.

Sprint customers are expected to be transitioned to T-Mobile’s network over the next three years, Sievert said. He noted 20 million Sprint customers already have handsets compatible with T-Mobile’s network, and said the company will “aggressively” migrate CDMA voice subscribers to voice-over-LTE technology though handset upgrades. To minimise service disruptions, Sievert added the combined operator will maintain CDMA on 800MHz until customers are fully transitioned.

Scepticism
Legere cast the combination as a boost for both jobs and competition, stating the new company plans to hire thousands of new workers to staff its call centres and stores, and build its 5G network. T-Mobile also claimed the new company’s lower costs, greater economies of scale and additional resources will help it provide US consumers with lower prices and greater competition.

All told, T-Mobile said the combined company plans to invest $40 billion in its new network and business in the next three years, which it claimed will fuel job growth in turn.

GlobalData research director Avi Greengart pointed out on Twitter Legere’s talking points seemed designed to win over regulators, addressing fears around competition, jobs and US leadership on 5G. He added vertical mergers are typically designed to achieve cost savings – $6 billion in this case – which frequently translates to job losses.

Matt Wood, policy director at media advocacy group Free Press, also warned in a statement the deal could disproportionately impact low-income families and people of colour, whom he said frequently use mobile as their only home internet connection and relied on competition between T-Mobile and Sprint to drive prices down.

Terrell McSweeny, a former member of the US Federal Trade Commission, in a separate Twitter post urged antitrust enforcers to review the deal with “careful scrutiny”.

Hurdles remain
The deal still faces an uncertain future in the hands of regulators in Washington.

The merger will need to be approved by the US Department of Justice (DoJ) as well as the FCC. Though the companies, which abandoned merger talks in 2014 after the head of the FCC signalled intent to block a deal, are likely hoping for a friendlier regulatory environment this time around, the Trump administration hasn’t always proved supportive of large tie-ups.

In a surprise move, the DoJ in late 2017 sued to block AT&T’s proposed deal with Time Warner, a so-called horizontal merger of companies competing in different markets. It remains to be seen whether it will prove any more receptive to a vertical merger of companies operating in the same space.

However, in a statement, Legere expressed confidence regulators will see the “compelling benefits” of the deal and wave it through.

If all goes well, the transaction is expected to close no later than the first half of 2019.