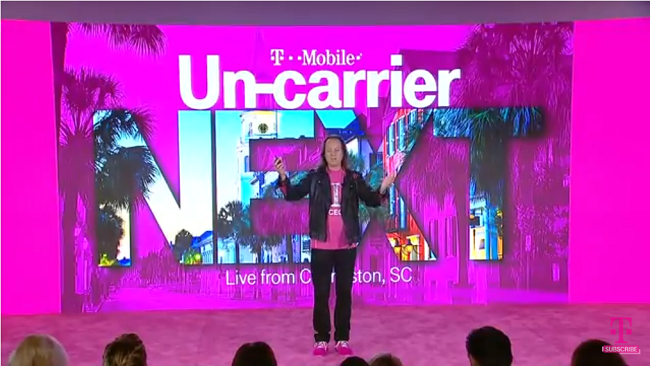 A proposed merger between T-Mobile US and Sprint took a major step forward as the Committee on Foreign Investment in the US (CFIUS) and other regulatory bodies gave the deal their blessing.

The CFIUS approval came shortly after Reuters tipped the body to clear the merger following moves by T-Mobile and Sprint’s parent companies to review or drop Huawei equipment from their future network plans. But the deal was also cleared by the US departments of Justice, Homeland Security and Defence, approval which points to a favourable outcome from other major regulators still reviewing the plan.

In a joint statement, the operators said the latter trio made no objections in a filing to the Federal Communications Commission (FCC) after reviewing potential impacts on national security, law enforcement and public safety issues. As a result, the departments had withdrawn a request to defer action on the merger.

T-Mobile CEO John Legere (pictured) hailed the approvals as “important milestones” in the move to combine the operators’ businesses, suggesting their willingness to engage with authorities was a key element in clearing the first hurdles.

FCC approval remains outstanding, with the Department of Justice yet to make a determination on antitrust elements, but Legere said the companies still expect the deal to be completed in the first half of 2019.

“We are a step closer to offering customers a supercharged disruptor that will create jobs from day one,” he noted.

Staff impact
Legere’s comment regarding jobs came shortly after two research institutes tipped US wireless retail workers’ earnings to drop by as much as 7 per cent due to the impacts of consolidation if the merger goes ahead.

In a new report, the Economic Policy Institute (EPI) and the Roosevelt Institute determined staff in the 50 markets expected to be most greatly affected by the deal could see their annual earnings drop by between $520 and $3,276. This would impact retail employees across the industry, including those at competitors Verizon and AT&T.

Heidi Shierholz, EPI’s director of policy, explained in a presentation of the findings this is because “the key way that non-unionised workers can secure decent wages is when their employer knows that they could quit their job and get a decent job at a competitor”.

Since the merger would reduce the number of competing stores, it would therefore reduce the leverage of workers across the entire sector, she said.

Even union members could see their bargaining power reduced if prevailing wages in the sector fall, Shierholz added.

Neither Sprint nor T-Mobile immediately responded to a request for comment on the findings.