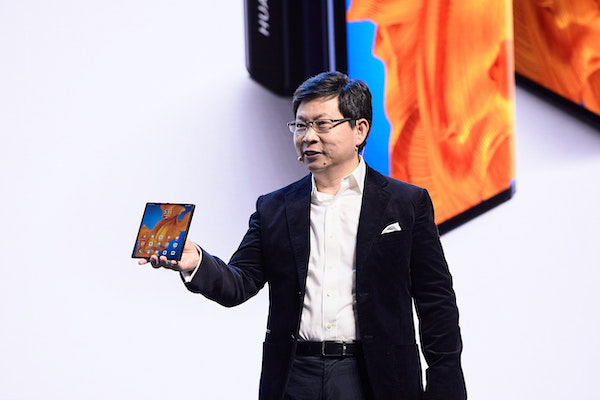 Huawei took the wraps off its latest product line, headlined by the Mate Xs foldable smartphone, which will be available across most of its markets from March at a price of €2,499.

In a virtual presentation, streamed to analysts and media at a venue in London, the company said it attempted to “push the boundaries” once again with its products, as it unveiled a new tablet and laptops, alongside the updated foldable.

Richard Yu, CEO of Huawei Consumer Business Group (pictured), who hosted the event, also provided a business update, stating it spent €15 billion on R&D in 2019, as it attempts to look to grow hardware sales at home in China, and across Europe.

He said the company had “consolidated” its position as the world’s second-largest smartphone manufacturer, shipping 240 million smartphones in 2019, representing a 16.8 per cent year-on-year growth.

Mate Xs
Following the launch of the Mate X at MWC19 Barcelona, the company unveiled its second foldable device.

Like its predecessor, the Mate Xs features a full view display spanning 8-inches, reducing to a 6.6-inch main screen when the phone is folded and a 6.38-inch secondary screen.

The company said the main difference with the new device lies in its foldable hinge, which has an “improved Falcon Wing” featuring more than 100 interlocking parts, and has been made to be more “durable”.

Huawei clearly placed more emphasis on the foldable hinge after it was forced to delay the original Mate X, stating it wanted to improve its flexible capabilities.

There have also been numerous software upgrades, including a revamped selfie camera allowing users to take the snaps on the device’s secondary screen, and Multi-Window, allowing two apps to be displayed side-by-side and interact with each other.

Unlike the Mate X, which was only sold in China, Yu said the Mate Xs will be sold at home and abroad.

It will run Huawei’s EMUI 10, an open source version of Android, and use its in-house App Gallery in place of Google’s Play Store.

Apps
The consumer chief reserved a large portion of the presentation to push Huawei Mobile Services and its App Gallery, as it continues its drive to draw attention to its in-house software following its Google Android ban.

Mate Xs will be one of its first phones to feature the App Gallery, along with the recently launched Mate 30 Pro.

Yu drew on the Google ban during his presentation, noting the company had been a long-term partner of the US company and had helped it develop both products and technology.

He reiterated the company’s belief technology should be “open” globally, a shot at the US’ trade blacklist on the vendor.

Yu’s comments follow a statement by Google warning users not to side- or pre-load its apps and services on new Huawei devices.

MatePad Pro
Yu highlighted the portability of its new tablet, with a 14.6mm thickness and weight of 1.33kg.

Available in four colours, it has a full view display, spanning 13.9 inches and supports up to 3K resolution. The line also includes a 5G option.

One major feature of the device is its ability to seamlessly integrate with Huawei’s other products: it offers Multi-Screen collaboration through a screen share, and allows users to navigate and control both devices on the tablet’s display.

MatePad Pro has a starting price of €1,499 and will be available from April.