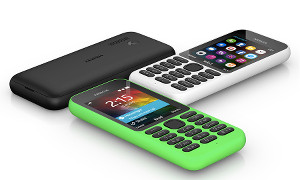 Microsoft Devices Group unveiled what it called its “most affordable internet-ready phone” — the $29 Nokia 215 — with the aim of tapping into demand for low-cost devices in emerging markets.

Microsoft said the phone, which is available in single SIM and dual SIM form, addresses the design, build quality and battery life requirements of emerging markets.

The battery can provide 20 hours of talk time, or 29 days of standby for the single SIM version, and 21 days for the dual SIM version. It can also provide 50 hours of MP3 playback, 45 hours of FM radio playback and a VGA camera. It also has a new tool called SLAM for sharing content between devices using Bluetooth 3.0.

Jo Harlow, corporate VP of Microsoft Devices Group, said the Nokia 215 is aimed at “people looking for their first mobile device, or those wanting to upgrade to enjoy affordable digital and social media services, like Facebook and Messenger”.

The phone comes in three colours (bright green, black and white) and will initially be rolled out in selected markets in the Middle East, Africa, Asia and Europe during the first quarter of the year.

Microsoft has dropped the Nokia brand for its Lumia smartphone range but is continuing to use it for its lower-end feature phones in markets where the Finnish name still has strong brand recognition.

The Nokia 215 will be competing in the same space that Google is looking to enter with its Android One programme, announced in June last year.

The Google initiative is intended to drive the growth of low-cost smartphones in emerging markets, using a common hardware platform and stock Android OS to control costs.

After debuting in India, the programme was extended to Bangladesh, Nepal and Sri Lanka in December. Google is working with a number of operators and manufacturers in these markets.