LIVE FROM IFA2017, BERLIN: Richard Yu, head of Huawei’s consumer business, unveiled the company’s newest device processor, which is tailor-made to deliver advanced machine learning capabilities – as well as teeing up the company’s next flagship smartphone.

“Smartphones are smart, but not enough – we need more intelligence,” he said in a keynote presentation.

Called Kirin 970, the executive said the processor is “the world’s first smartphone SOC [system-on-chip] with a dedicated neural processing unit [NPU]”. Built using a 10nm manufacture process (with partner TSMC), the chipset fits 5.5 billion transistors into an area of one square centimetre – which compares with 4 billion transistors present in Kirin 960.

Alongside the NPU, Kirin 970 has an octacore CPU and 12-core GPU. The new architecture is said to deliver 25-times the performance and 50-times the efficiency of a quadcore Cortex-A73 CPU cluster.

Huawei said it is positioning Kirin 970 as “an open platform for mobile AI”, opening the chipset to developers and partners who can “find innovative uses for its processing capabilities”. 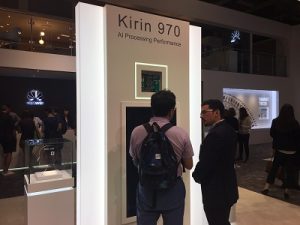 “The two things together is the best combination for our mobile intelligent life,” he said.

But there are a number of challenges which need to be addressed for AI to thrive – which is the aim of Kirin 970.

The first is perception – the ability for the device to take on information from the outside world using the camera and microphone. For the camera, “for the AI world, we hope this camera can understand the world, not only take the picture, but understand the object,” Yu said, while microphones need to cut through background noise to capture important information.

Second is cognition – the ability to sense if a user is walking or driving, what their hobbies are, what the intent of queries are, whether they are at home or at work, to provide “truly personalised and readily accessible services”. Yu touted a smartphone camera that is able to choose the correct camera settings for a specific scenario, without the need for user intervention.

Third is security, due to the amount of private and sensitive information collected. On-device processing offers more privacy protection than cloud-based services, Yu said, due to the fact the information resides on the device.

Finally is power. While cloud-based AI is able to run in powerful data centres, “on a smartphone, the battery is small, very limited,” he said, meaning efficiency is paramount. 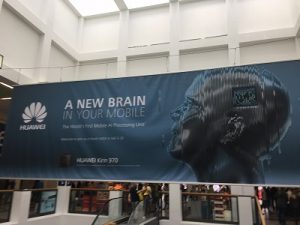 Yu said there will be two versions of its Mate 10 device – due to be announced next month – with Mate 10 Pro also on the cards. He also said it will be Huawei’s first device with a full front display, echoing the bezel-less designs popularised by Samsung and LG Electronics.