Airtel and Vodafone Idea’s Q3 financial results, released last week, provided a stark reminder of the bleak operating environment in India at the moment, with structural consolidation providing only partial mitigation. The Indian mobile market is currently in the throes of a multi-year period of turbulence that can be traced to the entrance of Reliance Jio in 2016.

For a country with the world’s second largest population, a high growth economy and professed destination for foreign tech investment, the gulf between government rhetoric of a digital economy and the challenging regulatory environment it has presided over is in need of urgent redress.

From a consumer perspective though, things are rosy.

Jio’s entry in September 2016 triggered a rapid acceleration of 4G adoption, driven by free/zero-premium 4G tariff plans, cheap 4G feature phones (under $30) and increased handset availability from regional vendors. Today, 4G penetration has reached around 55 per cent of total connections from less than 10 per cent in 2016 – in the same timeframe, 4G adoption in Pakistan and Bangladesh has grown to 23 per cent (from 3 per cent) and 9 per cent (from 0.1 per cent), respectively. Meanwhile smartphones currently account for nearly two-thirds of total connections in India (up from a third in 2016), compared to 49 per cent in Pakistan and 40 per cent in Bangladesh. 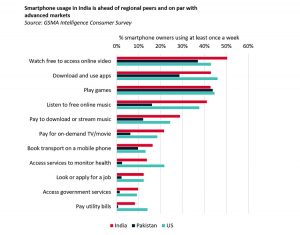 The price war that followed Jio’s entry means that India now has some of the cheapest mobile data pricing in the world, with the average price per GB (based on tariff plans) standing at around $0.26 (compared to the global average of $8.53). This in turn is driving high levels of data consumption: Indian smartphone owners, on average, listen to music online and stream video more than the global average (see image, left, click to enlarge), while the government’s flagship biometric passport (Aadhaar) has helped drive public service access from smartphones. In general, an average user in India now spends more than 17 hours per week on social media, more than in the US and China.

All of this is undeniably accelerating India’s digital transition: India will soon be the world’s second largest smartphone market (with an installed base of over 1 billion devices by 2025), 4G will continue to grow (80 per cent of total connections expected by 2025) and, amidst this massive digital transformation, the government is targeting 5G launches next year.

On the other side of the fence however, the operators are struggling. 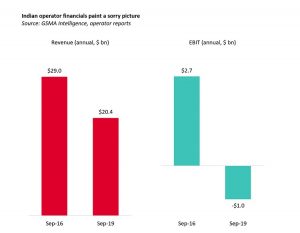 The aforementioned price war has had a significant impact on operator financials (see image, left, click to enlarge): annual revenues have declined by 30 per cent since September 2016, while annual EBIT has dropped from $2.7 billion to -$1 billion in the same time frame (a swing of almost $4 billion).

At the same time, the operators are facing a tough regulatory environment. In October, it was ruled that the operators will be required to pay the regulator a total of INR920 billion ($12.9 billion) in overdue levies and interest, made up of 3-5 per cent of their adjusted gross revenue (AGR) as spectrum usage charges, plus 8 per cent of AGR as licence fees. Airtel and Vodafone Idea are appealing the decision (specifically around how the AGR is calculated), but the outlook is bleak. Airtel and Vodafone Idea reported net losses of INR509.2 billion ($7.08 billion) and INR230.4 billion ($3.2 billion) respectively in their quarterly results last week, and rumours abound of Vodafone exiting the market (although it has denied this). Jio meanwhile, in a change to its wildly successful free calls proposition, has started to charge its customers for off-net calls in order to recoup the Interconnect Usage Charge (IUC) imposed by the Indian regulator.

These regulatory rulings come at a time when the Indian mobile sector is in a precarious financial position, and could potentially weaken the viability of the sector as a whole. Future network expansion and 5G plans could be put at risk, and there could be a domino effect on the entire digital value chain. Further, despite the obvious demand for data and digital services as outlined above, India’s visions of a world leading digital economy and ambitions to be seen as a poster child for a developing market becoming a fully-fledged digital economy in a short space of time (as outlined in its Digital India campaign) could hit some major road blocks.

This is particularly important as India looks to enter the 5G era, as a thriving mobile sector needs to be in place to help drive the creation and delivery of 5G products and services. The government should therefore seek to create an enabling environment for this to happen, encouraging operators to invest in the market and develop innovative services for the 5G future, rather than stifling them with punitive regulation that puts India’s entire digital future in jeopardy.

If all stakeholders work together in a supportive and forward-looking manner, the mobile market can get back in the fast lane and help drive the Indian, Asian and even global mobile economy forward.

Subscribe to our daily newsletter Back
Previous ArticleBulgaria aims to grant 5G frequencies by mid-2020
Next ArticleBlog: Survival of the Fitbit