It is almost six-and-a-half years since Iliad (under the Free brand) entered the French mobile market, upsetting the apple cart with its low-cost, unlimited usage offers.

The same group, owned by Xavier Niel, is now embarking on an odyssey into Italian telecoms with a recognisable plan of attack. Free created havoc in France, however, the age-old question as to whether the same model can apply to different markets looms large, with a range of factors likely to influence how this story plays out.

At the launch of Free in January 2012, Niel described French consumers as being the “cash cows” of Orange, Bouygues Telecom, and SFR (the three largest mobile players). Around the time France was one of the region’s most expensive wireless markets, with ARPU of close to €40 (see figure 1, click to enlarge). 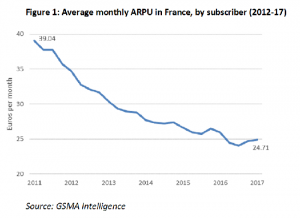 Niel promised to “liberate” consumers and presented two distinct offers: €2 a month for 60 texts and 60 minutes of calls per month; and a €19.99 a month contract for unlimited calls, texts, and 3GB of data. The competition, of course, was prepared. Orange launched Sosh in September 2011 to target the youth segment, while SFR began to offer services without a minimum term via sub-brand RED.

Free’s propositions, however, clearly tapped into some suppressed frustrations and proved popular with consumers. Despite some initial network issues, Free quickly amassed subscribers and stole market share: it now holds a 21 per cent share of connections.

Fast forward to the present and Iliad launched as a new MNO in Italy just last week with a similarly aggressive strategy. Iliad’s expansion into Italy is the result of its decision to take up the remedies package (spectrum, sites, and roaming) put forward by Wind and Tre as they sought approval from the EC to merge their respective outfits.

Straight out of the Free playbook, Iliad Italia’s CEO Benedetto Levi used impassioned language in his rally cry, where he promised a “revolution” in the country’s mobile sector. Iliad’s opening tariff comprises unlimited minutes and texts, 30GB of domestic data and 2GB for roaming in Europe for €5.99 a month (available to the first million subscribers). Levi also emphasised the company’s commitment to transparency, in particular guaranteeing there would be no hidden charges for services such as voicemail.

Still, competitive and transparent pricing does not mean Iliad’s success in Italy is a foregone conclusion. This may be helped or hindered by a number of other factors, including:

Prevailing market conditions
Italy is by far and away a prepaid market. While this is atypical for a developed country, it may work to Iliad’s benefit. Having only a small proportion of users locked into long-term contracts may enable an accumulation of subscribers in Italy. Churn is also at the highest rates in Europe (2.74 per cent). Iliad’s initial offering includes no minimum contract period, compared with the often-used 24 months. This may suit users’ preference for flexibility and to switch – and perhaps play to any dissatisfaction with their current providers’ services and hidden costs. However, like France, ARPU has fallen in Italy in recent years, from €36 at end-2009 to just over €20 by end-2017. This may leave less scope than in France for Iliad to undercut the established carriers and longer to break even on its investment.

Iliad’s starting point in the Italian market
Free was a new MNO in France, but was able to leverage an existing subscriber base of a few million to whom it could offer additional price incentives. This tactic could not be repeated in Italy where Iliad has no pre-existing brand presence, limited distribution outlets and will be mobile-only. Instead it will be launching afresh, designed to maintain a four-player market after the merger between Wind and Tre. Historically, fourth entrants to European mobile markets have often struggled to establish a strong foothold – Yoigo, for instance, has taken over a decade to acquire less than a tenth of the Spanish market.

The reaction of the incumbent MNOs
As in France, Italian MNOs have readied themselves for Iliad’s arrival on their turf. TIM’s counter strikes include the launch of a more cost-conscious brand, Kena Mobile, while Vodafone Italy has been automatically increasing its customers’ data allowances at no extra cost and pushing multiplay deals. Operators have also been exploring means of cutting costs, including offering online-only discounted price plans, which saves on expensive physical sales channels.

Italy will likely be a bigger gamble for Iliad than France, however there is no reason it could not succeed in challenging the status quo. Iliad showed in France it is still possible to significantly disrupt an established and mature mobile market, and it has experience on which to capitalise. Its initial offer is highly attractive and it is aiming for a 10 per cent market share in the first few years of operating, pledging to invest €1 billion in its network during the period.

TIM, Vodafone, and Wind Tre are right to have taken defensive measures. They may also do well to expand their marketing budgets to advertise their content and network quality as the key price differentiators, and major reasons why consumers should opt to stick rather than twist.

Whether Niel and Iliad are able to make lightning strike twice remains to be seen. After all, Italy is not France and replicating the tactics that worked in one will not necessarily deliver results in the other. We may not see a revolution, although an evolution of the landscape certainly appears to be on the cards. The success of Iliad, or its competitors, will be in their own hands.