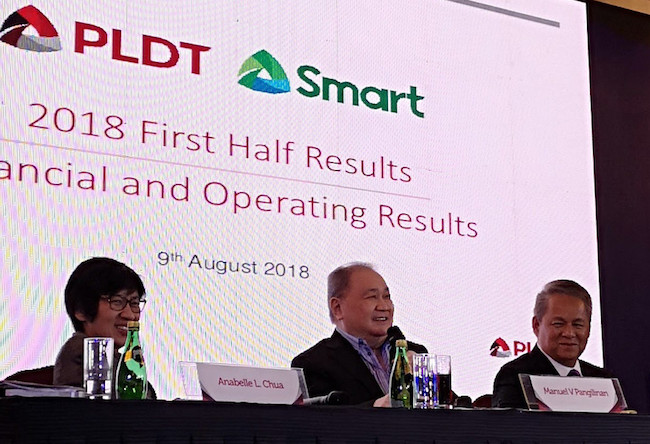 Philippines-based operator PLDT reported a sharp drop in profit for the first half of 2018, but its recovery continued as it added mobile subscribers and posted revenue gains across all business units.

The operator generated net income of PHP11.8 billion ($222 million), down 29 per cent on H1 2017 when it recorded a higher gain from the sale of assets. The recent figure was also impacted by higher costs, including a PHP3.6 billion hit relating to accelerated depreciation covering a shortened estimated useful life of some network assets resulting from its network transformation programme.

Total group revenue rose 5 per cent year-on-year to PHP78.3 billion, with service revenue up 2 per cent to PHP72.5 billion.

Manuel Pangilinan, chairman and CEO (pictured, centre), said in a statement: “Our individual wireless business has taken further steps forward, making gradual additions to its revenues and subscriber base. Despite headwinds, the favourable factors for our continued recovery remain in place.”

Revenue in its home and enterprise businesses increased 14 per cent and 9 per cent respectively.

Subscriber growth
Its mobile unit Smart added 4.6 million subscribers from H1 2017 to end June with 63.1 million total subs. Post paid additions accounted for the majority of the gains and its LTE subscriber base grew 58 per cent. Prepaid ARPU rose 6.4 per cent to PHP116, while post paid ARPU dropped 17 per cent to PHP813.

It installed more than 3,900 LTE base stations, boosting its total count by 45 per cent to about 12,600. It also added more than 500 3G base stations, raising the total to 10,400. The company said the stepped-up rollout of LTE and 3G base stations will enable Smart to meet its commitment to the government to provide high-speed wireless data services in more than 90 per cent of the country’s cities and municipalities earlier than end-2018.

The company maintained its guidance for full-year telco core income in the range of PHP23 billion to PHP24 billion, while capex will be around PHP58 billion this year as budgeted, up from PHP40 billon in 2017. Wireless is forecast to account for 54 per cent of capex this year.