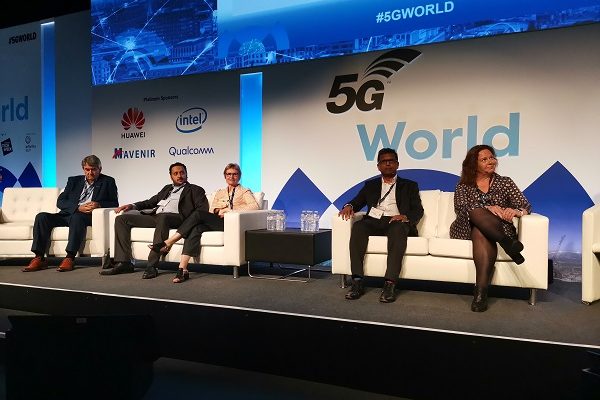 LIVE FROM 5G WORLD, LONDON: Discussions by operators around 5G deployment strategies highlighted key differences in approach, with some aiming to be pioneers and others taking a more measured approach.

Channa Seneviratne, executive director for network and infrastructure engineering at Telstra (pictured, second right), said it wanted to be a technology leader, but the “compelling reason was that our 4G network data growth has been 60 per cent to 70 per cent year-on-year” making capacity offset “the very first obvious use case”.

In contrast, Paul Berriman, group CTO at PCCW in Hong Kong (pictured, left), noted high fibre penetration and sufficient mobile capacity left little incentive to push ahead: “Our first stage will be some time next year when we put 3.5GHz base stations into dense urban areas.”

Kirsi Valtari, VP of telco efficiency for Elisa in Finland (pictured, centre), said 5G is a good fit with the company’s existing business model. “We offer speed-based tiers with unlimited mobile data, and now with 5G we can offer even higher speeds”.

Telenor Norway CTO Ingeborg Ofsthus (pictured, right), said it is “busy trialling, piloting, testing out” the technology with different vendors, focusing on “testing overlays, we are testing swaps” to ensure it is “well equipped when it comes to knowledge and experience”.

She also noted key differences “around use cases, around the ecosystem, how we work with business partners and industry partners”. The operator plans to “quite aggressively decommission legacy technology”, meaning 5G will need to fill their roles, including providing fixed wireless services to replace the copper (DSL) network: “It’s the most rock-solid part of the case,” she said.

Haithem Alfaraj, SVP of technology and operation at STC (pictured, second left), noted Saudi Arabia’s Vision 2030 programme, intended to diversify its economy, is a major driver in its 5G plans, while also highlighting ecosystem as a factor.

“I think it’s going to create a great opportunity for the digital transformation move that telcos have been trying for the last four or five years. I think that will accelerate”.

The company is looking to wrap-up its testing phase in the coming months, with commercial services following after. “The technology maturity remains a challenge for all the operators,” he noted.

Seneviratne said: “Each week we have new software in the network, and we expect that as par for the course. Even in the devices we’re seeing updates from the chipset manufacturers pretty much every two or three weeks. It is very early, but we want to learn the lessons.” It provides information to its vendors to help drive maturity.

Industry
With early 5G deployments centering on enhanced mobile broadband and fixed wireless use cases, there was also a discussion of the impact of next-generation networks on industrial customers.

Ofsthus noted much of the talk is about latency, the need for a 5G core and edge computing: “we can see that those components won’t be there when we launch 5G.”

“For sure we have a lot of interested parties, but then how do we then make that into scale, not only working with one or two, but making something that can really scale and is sustainable?”

Likewise, Valtari said while Elisa plans trials later this year, it is unsure about timelines: “We will be experimenting with the industrial customers to find what will actually be the first realistic use cases.”

Berriman said the biggest challenge for PCCW is a hike from around 3,000 to 30,000 base stations and from 4 million smartphones to 40 million devices,

“The question is where is the business case to support that, and from an operating point of view, how can we get down to zero-touch provisioning, because at the end of the day, if we have to have any form of human intervention to support all those devices, it’s going to kill the business case.”