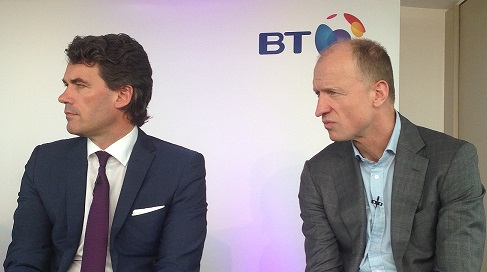 BT and EE ramped-up the charm offensive as the companies’ planned £12.5 billion deal goes through an assessment by the UK’s competition authorities, arguing that the merged company will create a “true UK digital champion”.

Speaking at an event at BT Tower today, Gavin Patterson, chief executive of the UK fixed line incumbent, said this organisation will have “the scale and the expertise to deliver the UK’s connected future,” but will be “one that others can piggyback on if others don’t have the appetite to make the investments themselves”.

Unsurprisingly, Patterson focused heavily on why the deal will not impede the competitive market in the UK, including that it would not reduce the number of fixed or mobile operators, and that other companies will still be able to buy fixed wholesale services from Openreach or MVNO capacity from EE.

“BT has shown that with its huge investment in fibre broadband that progress doesn’t have to be at the cost of competition – hundreds of companies use our networks on equal terms, and they will continue to do so. We are happy for them to stand on our shoulders,” he continued.

Olaf Swantee, chief executive of EE, picked up on this theme, stating: “The UK has one of the most dynamic and successful MVNO markets. The amount of revenue and profit we do from that is very, very good, so it will continue – it is an important and integral part of our businesses.”

“And the MVNOs are benefiting from investments we have made on the Orange and T-Mobile side – if we hadn’t been able to merge, we wouldn’t have the capacity to support potentially some of the MVNOs in the long run,” she said.

Investment
Citing the merger of Orange UK and T-Mobile UK to create EE, Swantee said that “consolidation has proved that it can unlock investment”.

“Just four years ago Orange and T-Mobile received the approval from the European authorities and Ofcom to come together, and that really started an investment wave in the UK, we invested £1.5 billion and took the UK from laggard to leader in a very short time,” he said.

“In future, investment will be needed to stay ahead of other markets. If we look at 5G, we expect the standards to be out in the market in 2018, we believe that products and technologies will be available from that timeframe onwards. What we do know is that a high investment will be required, we need to upgrade all the equipment and the networks, it will require small cells, it will require spectrum,” Swantee continued.

And, Patterson said, the combined company will have around a third of the competitive retail broadband and mobile markets, “in stark contrast with the situation in most other countries, where the incumbent has a far larger market share”.

The CEOs were speaking at the launch of a report titled “An analysis of the benefits to UK consumers, businesses and citizens from BT’s acquisition of EE”, written by analyst Robert Kenny of Communications Chambers.

And, unsurprisingly, Patterson was bullish on the potential for success from the deal.

“The academic evidence says that not all mergers help with innovation. But the kind of mergers that do are the ones where you bring two organisations with adjacent capabilities, knowledge and expertise together. If they are too far apart, there’s no cross pollination; if they are too alike, again there’s no cross pollination. If the two are close, but different, coming from the same problems but from different angles, you get cross-pollination benefits for innovation, and that is precisely what BT and EE are.”

Addressing the competitive element of the deal, he noted that the companies already operate, and will continue to operate, under “some of the most pro-competitive regulation out there”.

“There’s a whole raft of existing interventions to protect consumers, customers, competition. Those have been put in place for good reason, some of them date back to a time when the market was growing robustly, and nobody is arguing against them. Crucially, they are not going to go away,” he said.

“This is the start of BT and EE setting out a strong benchmark as they move into phase 2 of the acquisition,” reflected the CCS Insight man. “Positioning themselves as ‘digital champions’ reflects the significant investment that BT has made in not only its ultrafast broadband network, but also its recent focus on BT TV and BT Sport and EE’s move towards 4G and driving network innovation.

“As the deal comes close to finalising, rivals will be calling for lower prices, greater access to BT’s network and even a full demerger of Openreach. While there are merits of BT’s acquisition of EE, regulators will be duty bound to listen to the comments of their competitors who will feel less positive about the transaction and the increasing monopolisation of the telecoms sector.”