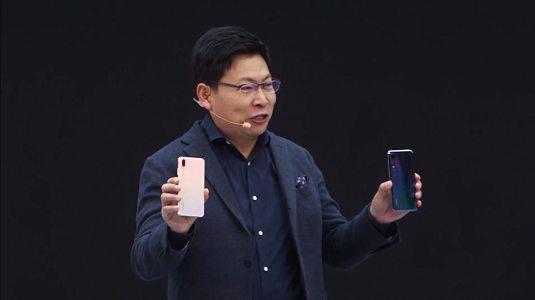 Huawei unveiled its latest premium smartphone, P20, which sees further adoption of the company’s artificial intelligence (AI) technology, accompanied by a Pro version which made the headlines for its triple camera set-up.

Richard Yu, CEO of Huawei’s Consumer Business Group (pictured), said the reason for the use of P20 brand rather than P11 was because of the “big jump and new technologies”, although in many ways the device is a fairly standard upgrade over 2017’s P10.

The larger device has also become Pro rather than Plus, he said, because “this time we are introducing professional camera technologies” into the smartphone. Yu pointed out the Huawei brand on the rear of the device is now vertical rather than horizontal, so it is the right way around when used in landscape mode – the orientation for traditional cameras.

Camera and AI
Dual camera smartphones have fallen into one of two camps: RGB paired with monochrome sensor, as Huawei has used, or standard and telephoto lenses, as supported by Apple’s iPhone X.

P20 Pro mixes this up, with a 40MP RGB sensor, 20MP monochrome sensor, and 8MP sensor with telephoto lens.

The devices are powered by Huawei’s Kirin 970 chip, which includes an AI-focused neural processing unit. As with earlier devices, such as the Mate 10 and Honor View 10, this enables automatic scene selection, with the addition of AI image stabilisation, to steady night shots without a tripod.

New to the camera is 4D predictive focus, calculating moving objects and focusing on them to capture detail, and P20 also features AI-assisted composition, providing intelligent suggestions to frame group shots and landscapes.

Huawei also adopted a “notch” similar to Apple’s iPhone X, although Yu pointed out it is smaller, so more space is available for on-screen notifications.

The AI features have also been extended to the audio: in partnership with Dolby, the device detects the type of audio being listened to in order to optimise performance, and the AI can also distinguish between voice and background sound to cancel out unnecessary noise. 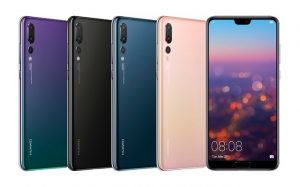 A front-mounted fingerprint scanner can also be used to fill the same role as the three on-screen buttons on Android devices, and are designed to simplify unlock and navigation while freeing-up space on the display.

This device shares many of the technologies of P20 Pro, including the triple camera, but features an in-display fingerprint sensor on the front (in addition to rear-mounted scanner) and 6-inch curved 2K display.