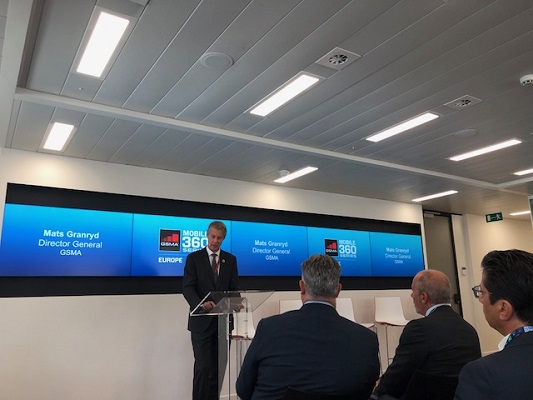 LIVE FROM GSMA MOBILE 360 SERIES – EUROPE, BRUSSELS: Mats Granryd, director general of the GSMA (pictured), stressed the importance of fostering a trusted online environment where citizens feel safe, as digitalisation faces scrutiny from politicians and regulators across Europe and beyond.

In a speech opening this year’s GSMA Mobile 360 Series Europe event in Brussels, Granryd put a major focus on the importance of artificial intelligence (AI), stating Europe should play a technology leadership role and “not stand on the sidelines as AI develops”.

However, he noted that while the technology will be “key to future business and digital transformation”, there remained social, economic, ethical and legal questions around AI, along with other digital technologies.

“There are fears that digital disruption has the potential for destroying jobs and increasing inequality, and in the process, upending the European social model,” said Granryd.

He continued to state that politicians and regulators alike are “seeking to harness the digital revolution” while ensuring Europe’s citizens are fully benefitting, as democracies become a target of “malign influences misusing the networks that are part of our everyday life.”

With such challenges in mind, Granryd said the mobile industry’s “long history as a champion of privacy and security for our customers” was increasingly important.

“As we work to connect the unconnected and lead the way to a 5G future, we need to stay vigilant to our responsibility to consumers and in a way that creates opportunities for all.”

Time to act
Also opening a Politico event being held alongside Mobile 360 Europe, Granryd said Europe must show leadership in other next-generation technologies, including 5G and IoT, or risk leaving the economy and its citizens behind other leading regions including the US and China.

Granryd said having the “scale and economic clout” to compete on the global stage is more critical than ever and it was now imperative that both the mobile and broader European industries “are able to stand their ground globally”.

Addressing the automotive, healthcare and manufacturing industries, among others, Granryd said there were significant opportunities ahead as we stand “on the cusp of the 5G era”, but warned the road ahead was not an easy one.

“In Europe, we need to think about how to encourage long-term growth and development, how to create an environment that is conducive to investment, and to ensure the expansion of next-generation digital networks and services,” said Granryd.