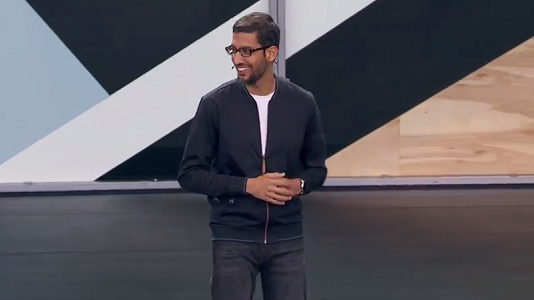 Google used its I/O 2016 event to talk up its work in areas including machine learning and virtual reality, with head Sundar Pichai stating that “we are pushing ourselves really hard so that Google is evolving, and staying ahead of our users”.

A significant amount of time was dedicated to the growing importance of voice-driven services, with the executive stating that 20 per cent of queries from US mobile users are already made in this way. “Given how differently users are engaging with us, we want to push ourselves and deliver rich information in the context of mobile,” he said.

Driving this is Google Assistant, which it described as “conversational”, and more like a context-aware two way dialogue. This, it said, is enabled by its natural language processing technology – “our ability to do conversational understanding is far ahead of what other assistants can do”.

Google Assistant goes beyond mobile devices, into the home, cars and wearables. At the event, Google showcased a voice controlled wireless speaker that can be used to control connected devices, similar in many ways to Amazon’s Echo and its Alexa voice platform.

“Credit to the team at Amazon for creating a lot of excitement in this space,” Pichai said.

Android N
Unsurprisingly, much of the developer-focused event was focused on the next Android release – so far known only as Android N. Dave Burke, VP of engineering at Google, said that “we set about redesigning and rewriting many fundamental aspects of how the system works”, focusing on performance, security and privacy.

VR platform
This was accompanied by the unveiling of Daydream, which was described as a “platform for high-quality mobile virtual reality”.

Daydream encompasses smartphone optimisation, a reference design for headset and controllers, and apps (distributed via the Play store). “We’ve designed and built each part in concert with the others, with a focus on getting the end-to-end user experience just right,” said Clay Bavor, the company’s VR chief.

Daydream forms “part of the core of Android N”, meaning it is easy for developers to make Daydream-ready smartphones. Vendors onboard already are Alcatel, Asus, HTC, Huawei, LG, Samsung, Xiaomi and ZTE.

“Several” compatible headsets will also be available later this year.

Among a raft of other updates, Google also showcased new messaging and video calling apps, called Allo and Duo respectively.

And Android Wear is also set for its “biggest platform update yet”, which includes the ability to create more powerful standalone apps to improve usefulness when not paired with a smartphone.