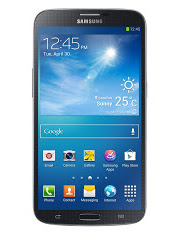 The South Korean company said the line “combines the portability and convenience of a smartphone with the power, multitasking capabilities and extensive viewing experience of a tablet”.

“We are aware of a great potential in the bigger screen for extensive viewing multimedia, web browsing, and more,” said CEO and head of Samsung’s IT & Mobile Business, Jong-kyun Shin.

The devices feature Group Play, which allows users to share content across up to eight devices on the same Wi-Fi network; Samsung WatchON TV remote control functionality; Samsung Link for streaming content to a TV, tablet or computer; and S Translator which provides text or voice translation. They also feature split-screen capability.

Both devices run on the latest 4.2 Jelly Bean version of Android and include an 8 megapixel rear-facing camera and 1.9 megapixel front-facing camera. Both have dual-core processors — 1.7GHz for the 6.3 inch version and 1.4GHz for the smaller model — while the Galaxy Mega 6.3 supports LTE.

The two versions of the Galaxy Mega will be launched in Europe and Russia in May, with global availability to follow.