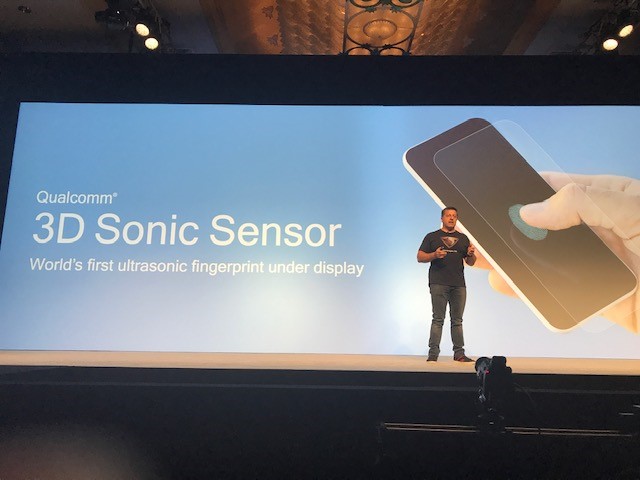 LIVE FROM QUALCOMM SNAPDRAGON TECH SUMMIT 2018 – MAUI, HAWAII: Qualcomm revealed a new ultrasonic fingerprint sensor technology for under-screen readers which could be headed to smartphones in 2019 as part of its newly unveiled Snapdragon 855 platform for 5G devices.

Detailed specifications for Snapdragon 855 are yet to be released, but Qualcomm teased the platform’s capabilities on the first day of its summit, noting it will include a fourth-generation artificial intelligence engine and a new computer vision image signal processing for improved camera performance.

It will also support Qualcomm’s new 3D Sonic Sensor technology, which uses sound waves to generate a picture of a user’s fingerprint.

Alex Katouzian, Qualcomm SVP of mobile (pictured), said the reader will work even when users have oily, wet or dirty fingers, eliminating a major hassle associated with current sensors. He hailed it as “the future of fingerprint technology.”

“The 3D Sonic Sensor is truly the most secure solution on the mobile market today, because the sensor can capture a whole 3D image of the fingerprint’s ridges and pores,” Katouzian said.

Qualcomm’s first attempt at an in-display fingerprint reader in 2015 failed to catch on, but it seems the new version could show up in future devices from Samsung.

The vendor reportedly committed to use Snapdragon 855 in a 5G smartphone due out in early 2019, and a report from CNET in July tipped Samsung’s next flagship to include an ultrasonic fingerprint reader in its display.