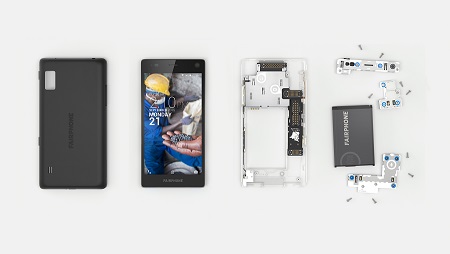 “Ethical smartphone” start-up Fairphone ramped-up the promotional activities around its Fairphone 2, with the device showcased at the London Design Festival.

The company revealed Fairphone 2 in June 2015, and pre-orders are currently open – production is slated to start in November, with delivery “shortly after”. It said it has received 15,000 orders for the device, its “crowdfunding goal.”

The first-generation Fairphone was launched in 2013, with the company committing to “tracing materials directly to their source from conflict-free mines in the Democratic Republic of Congo, improving working conditions for factory staff in China and reducing e-waste with the collection of scrap phones in Ghana”.

Fairphone 2 features a “modular architecture” which is easy to open and repair, “resulting in a longer-lasting device that encourages owners to take more responsibility for keeping their phones in working order”.

Cost breakdown
The company has also published a detailed cost breakdown, to give customers “greater insight into what it costs to make, sell and service a phone, to bring more transparency to the industry”.

With an average consumer price of €525, a €118 chunk of this is accounted for by taxes and reseller margins, leading to an average net sale price of €407.

The biggest chunk (€340) is used to manufacture the device, with Fairphone noting that “as a small manufacturer with a relatively small production run, materials represent an especially significant portion of the overall expenditure”.

This figure also includes an investment in some social and environmental schemes.

Other sums given were €33 for investments in “developing high-performance phones and projects that stimulate social innovation”; €25 goes toward operations; and €9 is profit which may be used for “unexpected costs or additional investments in our social impact programs”.

Fairphone 2 has a 5-inch full HD display, running Android 5.1. It is powered by a Qualcomm Snapdragon 801 processor with 2GB of RAM, 32GB of storage and microSD slot, and LTE support.

In the UK, the device is also being sold on a contract basis (and contract-free) by The Phone Co-op, which is described as “the UK’s only customer-owned mobile network, which is democratically controlled, and growing the cooperative business model by helping other cooperatives start and expand”.

Fairphone is also planning to showcase the device at events including Dutch Design Week in Eindhoven in October, Heldenmarkt in Berlin during November, and at an unspecified event in Paris during December.

Fairphone silent on future as second model sells out