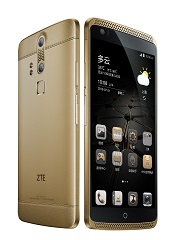 ZTE unveiled its latest flagship device, Axon, in its home market, following an earlier US unveiling, accompanied by a new wearable.

Adam Zeng, CEO of ZTE Mobile Device, said: “Following its US debut last week, we are excited to bring our first ever global flagship to China – a market where our aim is to return to being a top-three smartphone vendor within the next three years.”

The Axon smartphone for China apparently “comes with the same premium design as the version recently launched in the US, but includes a number of additional features for the China market”.

Both are powered by a Qualcomm Snapdragon 810 processor, include dual-lens (13MP+2MP) rear and 8MP front cameras, 3000mAh battery, and memory expansion slot.

The US device announced recently sits somewhere in between: while it has the 2560×1440 screen and 4GB of RAM of the Axon Lux, it has 32GB of storage.

On the software side, Axon includes the “latest rendition of ZTE’s customisable user interface MiFavor 3.2”, as well as the vendor’s “innovative voice control solution”.

The China device is also described as “the first smartphone that can be unlocked with three different biometric authentication options: fingerprint, voice control and eye-scan”.

It is already available for pre-order from ZTE’s online store and online retailer JD.com, costing CNY3,888 ($626) with 128GB of storage or CNY2,699 with 32GB. Two colour options are supported: “Ion Gold” and “Chromium Sliver”.

The unlocked US device costs $449.98, and gains an additional colour: “Phthalo Blue.”

An “Axon Mini” will be available in China in future, the vendor said. It is not clear if it is also set for an international launch.

For the Chinese market, ZTE also unveiled Axon Watch, the most interesting feature of which is the OS – rather than Android Wear, it runs “Tencent OS”. It has a 1.4-inch screen and supports voice and gesture control.

The company did not provide guidance on pricing.