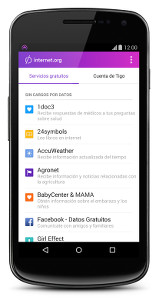 Facebook has chosen Colombia as the first Latin American market in which it offers its Internet.org app, providing a range of free basic online services to mobile users.

Colombia is the fourth country in which Internet.org has been made available. The previous launches have all been in Africa, starting with Zambia in July 2014.

Facebook partnered with mobile operator Airtel in Zambia and for the subsequent introduction of the service in Kenya. Internet.org is also available to customers of Millicom’s Tigo brand in Tanzania.

Mark Zuckerberg, Facebook CEO, launched the latest version, for which Tigo is once again the partner operator, in Bogota, alongside Colombia’s president Juan Manual Santos.

The Colombian version of the app is the first to include government services, such as education assessment service Instituto Colombiano para la Evaluacion de la Educacion and Agronet, a provider of information on agriculture and rural development.

Unsurprisingly, Internet.org provides access to Facebook and the company’s Messenger service, along with services from AccuWeather, UNICEF and Wikipedia.

Speaking at Mobile World Congress last year, Zuckerberg said he wanted to prove the business model of operators in emerging markets offering basic internet – as well as Facebook – for free.

Facebook’s Internet.org intiative was launched in August 2013 with the aim of bringing connectivity to the five billion people around the world currently without access to the internet.