Apps are accounting for an increasing proportion of time spent using internet-enabled services on mobile devices in the US, according to analysis from Flurry — while opportunities remain for new titles to make an impact.

The analytics firm found that between January and March, US mobile users spent 86 per cent of the time in which they are using smartphones within mobile apps. This compares with 80 per cent a year ago. 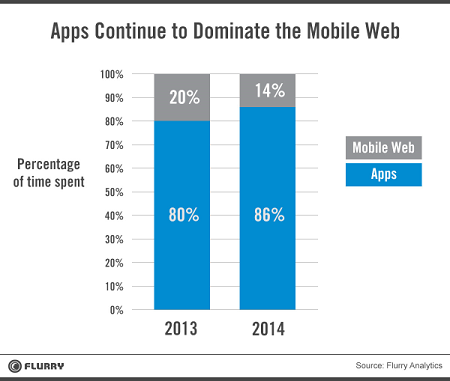 As a result, the time spent using the mobile web declined to 22 minutes, or just 14 per cent of usage time, compared to 20 per cent for the same period a year ago.

The total time spent using mobile devices each day increased by four minutes, or 2.5 per cent, year on year. Apps saw a larger increase of 9.5 per cent (12 minutes), but this growth was more modest than in previous years.

Flurry CEO Simon Khalaf wrote in a blog post that apps are now “completely dominating mobile” when they were considered a “mere fad” several years ago. The browser meanwhile “has become a single application swimming in a sea of apps”.

In terms of individual activities, 28 per cent of time was spent in social and messaging apps, up from 24 per cent a year earlier, while productivity apps doubled in terms of overall time spent to 4 per cent.

Facebook is the largest single app player in terms of time spent in apps. Its core social network app and Instagram photo sharing app accounted for 17 per cent of total time spent on devices.

Social messaging apps were responsible for 9.5 per cent of time spent on mobile devices, suggesting Facebook will be further boosted by the addition of WhatsApp, once the $19 billion acquisition of the messaging app closes.

Flurry noted that while Google and Facebook have a strong presence with their portfolio of apps, they probably account for less than 25 per cent of total time US consumers spend using mobile devices.

In addition, the top 10 ‘franchises’ accounted for less than 40 per cent of time spent on mobile devices, suggesting there remains significant fragmentation as new apps emerge to take a share of usage.

“In short, six years into the mobile revolution, there are numerous opportunities for new franchises to emerge in almost every segment of the mobile economy,” Khalaf noted.

Looking at advertising spend globally, Facebook saw the proportion of time spent in its apps roughly matched by its share of mobile ad spending (18 per cent), according to figures from eMarketer.

In contrast, Google, earned 49 per cent of overall mobile advertising revenue, compared to just 18 per cent of time being spent by consumers in its apps.

Looking at all other apps, time spent (65 per cent) far outweighed the proportion of advertising spend (33 per cent), suggesting there is scope for companies other than Google and Facebook to grab a larger slice of mobile advertising cash. 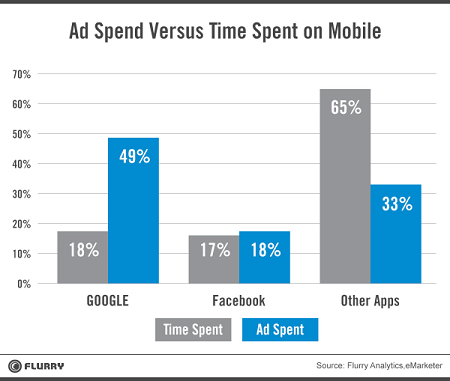 US consumers spend more time on apps than TV – Flurry