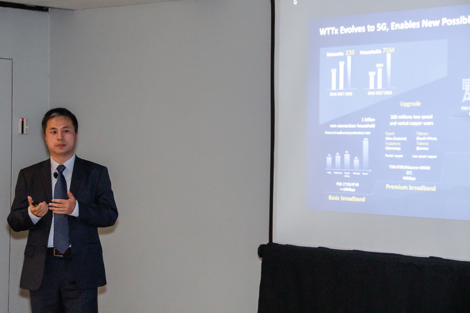 PRESS RELEASE: With the advent of 5G commercialization, how to develop existing 4G networks has become the key focus of operators around the world. Peng Lu, Vice President of Huawei LTE product line, offers his advice on this topic to Latin American operators at a round-table discussion on LTE evolution hosted by the GSMA during Mobile 360 – Latin America 2019. He predicts that LTE will remain the primary network to carry mobile services for a long time, and notes that operators should continue to improve LTE network capacity and coverage to build full-service foundation networks to meet the rising demands in traffic, user experience, and services.

According to the statistics by GSMA Intelligence, Latin America now lags behind in terms of LTE user penetration rate (35% vs. 69% in North America and 43% for global average). In the coming years, the region is set to see a rapid development of LTE with an estimated LTE user penetration rate increase to 65% and 15-fold data traffic surge by 2025. This will pose tremendous challenges to LTE networks, but will also create opportunities in revenue growth, which operators must seize by improving LTE networks.

Lu says that LTE capabilities have been improved more than tenfold since 3GPP Release 8 was introduced over 10 years ago. Operators now have an arsenal of LTE technologies to deal with increasing traffic, such as multi-antenna and multi-sector technologies. These technologies can increase network capacity by several times without adding new sites or using extra spectrum resources and therefore have been widely adopted for site capacity expansion. For example, 50,000 Massive MIMO AAUs working on LTE FDD or TDD spectrum have been deployed globally. With beamforming and multi-user multiplexing, these modules can improve network capacity by 3 to 5 times. Another example is 4T6S, which doubles the air interface resources by splitting the existing three sectors of a base station into six 4T4R sectors. This technology has been used in over 60 commercial networks in countries including Peru and Thailand.

In Latin America, the main obstacle that hinders network development is the large proportions of 2G users (26%) and 3G users (39%), making it difficult to refarm 2G/3G spectrum and subsequently keeping operation costs at a high level. To address the issue, the top priority is to migrate 2G/3G users and spectrum to 4G and to improve spectral and operation efficiency. This can be done in three ways: First, enhance LTE coverage so that it is the same as 2G/3G coverage, laying the foundation for user migration. Second, deploy VoLTE and NB-IoT/eMTC so that LTE serves as the foundation network of voice and IoT services. Third, introduce low-priced LTE terminals to encourage low-end users to migrate to LTE.

In addition to traditional MBB services, operators can take advantage of LTE’s wide coverage and excellent user experience to tap into new services for more profits. WTTx has been one of the fastest growing services in recent years. In 2018, the number of WTTx users increased by 25 million, faster than the growth of fiber users outside China. In Latin America, WTTx has been deployed on a large scale in countries including Brazil, Mexico, Peru, and Chile. By the end of 2018, more than 50 WTTx networks had been serving 6 million users in this region. WTTx has navigated Latin American operators toward a new blue ocean with stronger competitiveness.

Lu believes that LTE will still be the main source of profits for Latin American operators because of its numerous users and large traffic and service proportions. He emphasizes that Huawei will continue to work with operators and industry partners in innovating LTE solutions, promoting the industry, and fostering new services. Huawei will assist operators in unleashing the potential of LTE and harnessing a new wave of traffic, user, and service dividends to gain a competitive edge in the marketplace.