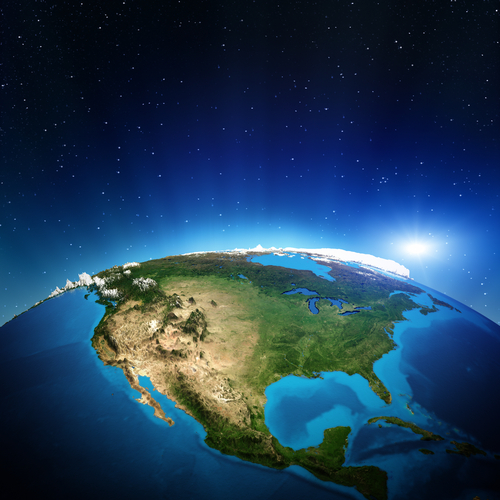 LIVE FROM GSMA MOBILITY LIVE 2016, ATLANTA: North America’s mobile market is one of the most mature in the world and, thanks to its “pioneering role” in 5G and the Internet of Things (IoT), as well as the highest smartphone adoption rate globally, the industry will account for 4.5 per cent (almost $1 trillion) of projected regional GDP by 2020.

These findings were highlighted in a new GSMA report published today, ‘The Mobile Economy: North America 2016’. It also said that smartphones account for 75 per cent of the region’s mobile connections (the highest in the world “by some distance”). This will continue to expand, albeit at a slower pace than recently (click image below to enlarge). 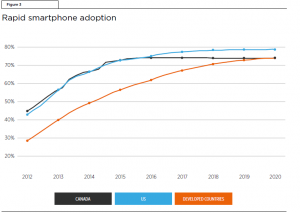 Factors driving this slowdown include less availability and generosity of handset subsidies by operators and the slowing pace of innovation in the smartphone market, reducing consumer appetite for new devices.

The report found there were 284 million unique mobile subscribers in the region at the end of 2015, a figure forecast to increase to 315 million (85 per cent of the population) by 2020.

Canada is less mature than the US in terms of subscriber penetration and will grow at 3.1 per cent annually to 2020, compared to 2 per cent growth in the US.

Data consumption
Meanwhile, with nearly 60 per cent of connections on 4G in June this year, the LTE market is booming in North America. Video streaming over 4G networks will account for more than three quarters of data consumption by 2020. However, while 4G coverage levels are high, the report noted that the US is behind South Korea and China in network speeds and believes more investment is needed to support greater capacity and faster speeds.

IoT
The report highlights a number of areas where the North America region is driving mobile innovation, particularly in the Internet of Things.

There were more than 60 million cellular M2M connections in the region at the end of 2015, accounting for nearly 15 percent of total mobile connections and forecast to account for 30 per cent by 2020.

The report also cites the technology battles taking place in the IoT space, particularly the Low Power Wide Area market (LPWA), where networks are being deployed using both licensed and unlicensed spectrum.

Mobile operators in the region, including AT&T and Verizon Wireless, are adopting the LTE-M standard in order to use existing 4G infrastructure for LPWA services.

Most recently, AT&T upped the ante in its battle with Verizon to lead the US market in launch of cellular-based low power IoT services, switching on a site in San Francisco running LTE-M technology.

“The recent decision in the US to identify and open up spectrum for 5G services – alongside its leadership of the IoT market – has reaffirmed the region as one of the world’s most advanced mobile markets and one that is leading the next wave of mobile innovation,” he stated.

Capex levels
Finally, the report notes that while capex levels have peaked and will fall to 2020, levels of investment (almost $170 billion over the five years to the end of the decade) will still be larger than any other region, with the exception of Asia Pacific (which has a vastly larger population).

Cashflow margins for North America overall are forecast to remain around 17 per cent over the next few years (16 per cent in the US and around 25 per cent in Canada).