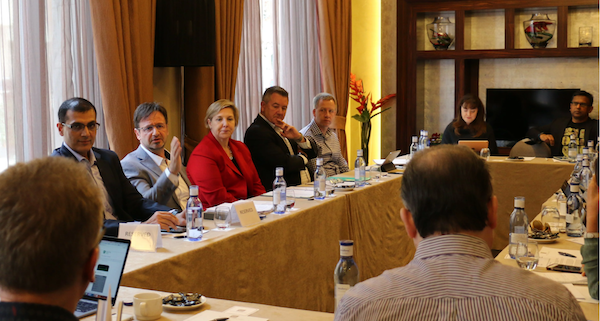 Speaking at an event to mark the close and ongoing relationship between the two companies in evolving the incumbent’s mobile network, Emilio Romeo, Head of Ericsson Australia and New Zealand, said the Swedish manufacturer forecast that – with the help of 5G – operators in Australia can increase addressable revenue by an enormous 48 per cent by 2026.

Robyn Denholm, Telstra’s chief operating officer, would not be drawn specifically on the percentage figure, but gave little indication that she thought it inordinately high. Flagging both IoT and 5G, Denholm thought the opportunity to create new revenue streams was “very real”.

“I think there’s a greater propensity for Australian enterprises to take advantage of the economic equation that the new use cases will bring across agriculture and mining,” she said. “This is a big part of our economy. Of the industries that will benefit most from 5G, a high proportion of them are in Australia.”

Developing multiple use cases, and initially targeting enterprises, is where Telstra sees the 5G business case. “If you only used 5G for a single dimension use case, it’d be like buying a high-performance car and leaving it in the garage only to listen to the car radio,” remarked Mike Wright, Telstra’s group managing director of networks.

At the heart of enabling multiple 5G use cases is network slicing, which, said Wright, can only happen by greater reliance on software. “As part of this evolution to a software world we are shutting down half of our exchange buildings and we’re going to build 2,500 distributed centres.”

“All core 5G network functions will be software-based in the cloud. We’re effectively going from static network to a dynamic one,” he continued.

The prospect of lower cost-per-bit is also crucial, as Telstra indicated it would not increase consumer prices for faster speeds.

Wright and Denholm expect to get ‘proper’ 5G up and running by 2019, beating rivals to the next-gen punch in the process.

“Once the standards for standalone 5G are set, which is likely to happen this September, then we can talk about real 5G,” said Denholm.

Part of the incumbent’s strategy is also to prepare the ‘mindset’ of consumers and enterprises, so that they embrace 5G when it comes along, is to continuing investing in 4G. Wright repeatedly referred to the importance of recent lab trials that achieved theoretical maximum speeds of 2Gbp/s. The performance was achieved in partnership with Ericsson, Qualcomm and hardware manufacturer Netgear.

“When moving from the 5G layer, we don’t want our customers to have different experiences, which is why we’re still investing in 4G capabilities,” said Wright. “You can get a 5G-like experience with 4G technology.”