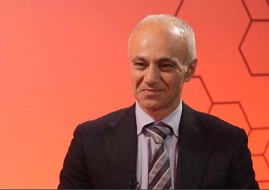 VIDEO INTERVIEW: The US may have set the pace in terms of LTE deployment, but Hossein Moiin, CTO of Finland’s Nokia Networks, reckons Europe is the “natural place to take leadership” when it comes to 5G.

“After all,” he told Mobile World Live, “Europe was once leader in the 3G era, and it was the continent that founded GSM.”

Moiin reasoned that the US had stolen a 4G march over Europe only because of better economies of scale.

“In the US you have a country of 300 million people and only four operators, but in the EU, where there is around 350 million people, you have many operators,” he said. “Such fragmentation of the market does not help the business case for investors. There are no technological barriers, it’s just a question of economics and return on investment.”

One way to address the issue, asserted the Nokia CTO, was to have “more enlightened policy” from the European Commission. “What’s really needed is cross-border ability to do mergers and acquisitions, in order to ensure that larger groups can be formed and business cases can be made,” he said.

Beyond 2020
Moiin said he did not envisage mass 5G deployment until “post 2020”. One reason, he said, was spectrum suitable for 5G would not be made available until 2019, and that there was still considerable work to do on standardisation.

“We don’t have real common ground, as an industry, on what spectrum we will use – will it be millimetre of centimetre waves? – and whether there will be a combination of different radio access technologies,” said Moiin. “These are some of the fundamental issues we are grappling with.”

The Nokia CTO did expect, however, that pre-standardised 5G versions will arrive before 2020, perhaps as early as 2018 in time for the Winter Olympics in South Korea.