BT today formally submitted its argument to gain regulatory approval for its proposed acquisition of EE, claiming the deal will “be good for competition, investment and innovation in the UK”.

BT made the submission to the UK’s Competition and Markets Authority (CMA), stating the proposed £12.5 billion takeover of EE will enhance competition in both fixed and mobile markets, as the number of mobile network operators will remain at four.

The CMA is already in the process of studying several areas where a BT-EE tie-up could potentially impact the landscape of the market, with the joint entity set to become the UK’s largest operator.

In its statement, BT pointed to the potential for increased competition in the fixed-mobile and quadplay arena, where Virgin Media and TalkTalk dominate the market. It also claimed that mobile and landline rivals utilising its Openreach network will remain unaffected by the tie-up. 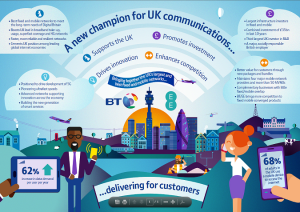 After securing unanimous shareholder support for the deal earlier this month, BT has now requested that the CMA proceed directly to a ‘Phase 2 investigation’ to allow the regulator to consider any complex issues in-depth without delay.

According to BT, the CMA should confirm in three weeks if it can move directly to Phase 2.

This appears to rule out earlier hopes of getting a green light at a Phase 1 approval process, which would have seen the deal potentially completed by end-September 2015. Instead, BT doesn’t expect the entire process and the transaction to complete fully until March 2016.

Gavin Patterson, BT’s group chief executive, added that the acquisition will lead to greater competition as BT will be able to leverage its traditional wholesale model to “enable other companies to use the networks we own”.

He said: “We will provide wholesale access to companies in the broadband market and we are happy to support others who wish to compete in the mobile market.”