Vodafone targets €1.2B in cost cuts after H1 loss 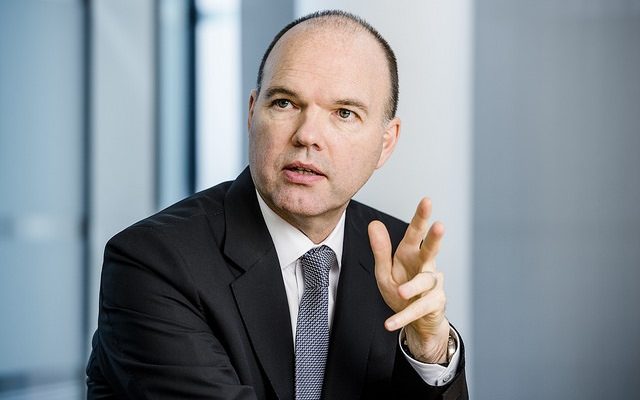 Vodafone Group unveiled a strategy CEO Nick Read (pictured) said would radically simplify the company by improving asset utilisation and slashing operating costs, after slipping into the red during its fiscal H1.

The operator said a €7.8 billion loss in the six months to end-September included a €3.4 billion dip from stripping Vodafone India out of its figures, following a merger of the unit with Idea Cellular. It also recorded €3.5 billion worth of write-downs at its India unit, along with Spain and Romania, and was hit by tax charges in Spain, negative foreign exchange movements and changes in accountancy standards.

Business review
As part of a wider business reorganisation the operator is set to create a venture called virtual TowerCo to manage its 58,000 European towers in a bid to increase usage the infrastructure.

Adoption of digital technologies for customer care and acquisition and “simplified” tariffs will be central to a bid to trim €1.2 billion from annual operating costs for its 2021 financial year (the period to end-March 2021).

Read said adopting technologies such as automation offered “a compelling opportunity to transform the group’s operating model.” Other savings will be made in back-office departments including IT and signing partnership deals to make better use of assets.

In its European consumer offering, Read said it would “radically simplify Vodafone” by selling one converged service. It will also focus on retaining existing customers and upselling to them rather than recruitment campaigns.

Following-on from recent results statements when predecessor Vittorio Colao pointed to challenges in Italy and Spain, Read noted Vodafone’s local units had taken action to try and address the slide. Outside of these two countries and India, Read said Vodafone had achieved “good performance in most markets”.

Its enterprise segment is in the process of being rebranded Vodafone Business, a move Read said would “help to increase our brand recognition as we broaden our service offering,” pointing specifically to the industrial IoT opportunity offered by 5G.

In developing markets, including subsidiary Vodacom, the company will focus on expanding data usage and extending the scope of its financial services operation.

5G and FWA
With rivals across major markets talking-up their abilities to lead in 5G, Read said the company aimed to “co-lead” in the new network technology: “we don’t want to go faster or slower than the first player in the market. The immediate benefit we see from 5G is around reducing costs.”

He added if Vodafone attempted to lead in 5G against incumbents it would turn into an “arms race”, driving up capex for all parties.

Across most of its footprint it operates both mobile and fibre, or will do should an asset acquisition from Liberty Global be approved. In this context, Read said the company had assessed fixed wireless access 5G, but didn’t see a business case “when you have fixed broadband in place with the ARPU levels you have in Europe.”

The company has now filed its papers on the Liberty Global deal with European regulators: Read said the process was “going well”.