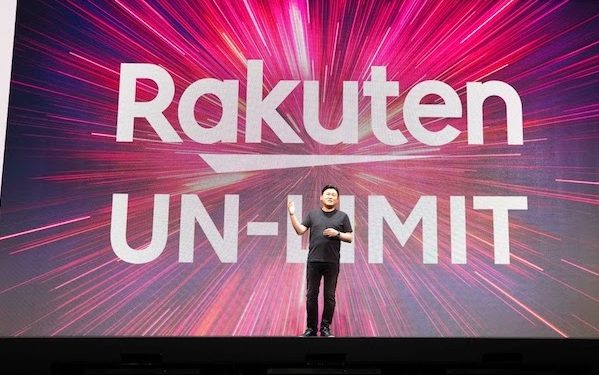 Mikitani claimed the Japanese new entrant is “almost on track” to sign up 3 million subscribers by year-end, but did not reveal how many new customers it attracted so far since network launch last month.

The operator, which launched as the fourth MNO in Japan during April, has been rumoured to be behind schedule in its subscriber acquisition targets.

Rakuten Mobile began accepting customer applications for its long-delayed launch in early-March, introducing an unlimited plan with free service over the first 12 months for the first 3 million customers: notably at the time it did not set a timeframe to achieve this number of users.

On an earnings call, Mikitani said about 80 per cent of users are signing up online, but with retail outlets closed due to the Covid-19 (coronavirus) pandemic, it faces a 20 per cent to 30 per cent shortfall in additions.

He said subscriptions are ramping, but acknowledged there is room for improvement.

“We started from zero. You cannot do marketing at full throttle. You have to have a substantial amount of subscribers, and you need to confirm that there is no problem. TV commercials haven’t been launched nationally, and campaigns are still waiting. I think we need a little more scalability where we can accept 100,000 subscriptions a day, so the second and third phase plans will be launched,” he explained.

On a more positive side, Mikitani claimed data usage is two-to-three-times higher than its domestic rivals Docomo, KDDI and SoftBank.

The company aims for 70 per cent of its 2.3 million MVNO customers to switch to its own service before deciding when to terminate the virtual offering, Mikitani said.

Mobile network
Rakuten Mobile CTO Tareq Amin also said it expects a significant acceleration in the timeline for deploying base stations over its original plan, because of the advantages its virtualised system enables in the cloud radio platform.

Deployments of 4,738 base stations to date exceed the 4,400 targeted at launch.

The company has contracts in place to install 10,000 sites soon, and plans to reach 70 per cent population coverage by March 2021.

Amin said the physical buildout was not delayed by lockdown measures, but noted some validation tests had been hindered by limited laboratory access.

Acquisition
Rakuten Mobile today (13 May) also announced plans to acquire US-based Innoeye, a provider of OSS software which the operator previously deployed on its 4G and 5G cloud platform. Financial details were not disclosed. Innoeye has approximately 500 employees.

Amin said it is making acquisitions to build the “entire software stack”, beginning in areas overdue for disruption including legacy OSS and BSS platforms.

The operator is a subsidiary of e-commerce giant Rakuten, which booked a loss of JPY35.3 billion due to increased investments in the mobile and logistics units. Revenue rose 18.2 per cent to JPY331.4 billion.