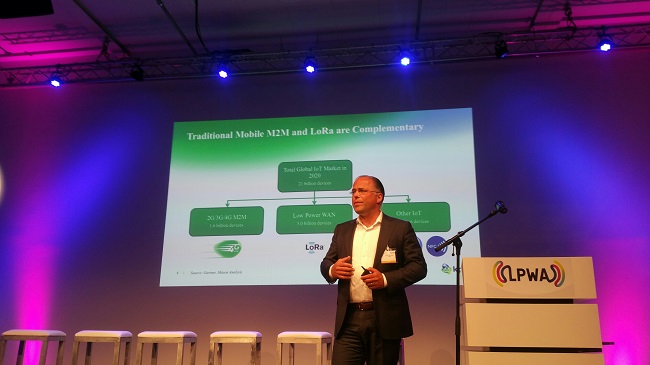 LIVE FROM LPWA 2016 EVENT, AMSTERDAM: KPN is set to complete nationwide deployment of a LoRa low power wide area (LPWA) network by the end of this month, but is keeping an open mind on future cellular-based LPWA technologies.

The largest mobile operator in the Netherlands is using its cellular network sites to rollout LoRa kit, stating that it didn’t want to wait for cellular standards such as NB-IoT to be ratified.

“We are building rapidly because many customers are asking for it,” explained Erik Peeters, director of IoT at the operator. Its initial target of nationwide deployment by November 2016 has been brought forward to June.

Despite KPN’s support of LoRa, most mobile operators are likely to wait for NB-IoT technology to be commercially available before deploying LPWA networks. Yesterday at the event KPN’s rival Vodafone suggested it could launch NB-IoT services in the Netherlands next year.

Meanwhile some mobile operators who have so far backed LoRa, such as Orange, have made a point of saying LoRa is complementary to an overall IoT strategy.

KPN’s Peeters told Mobile World Live that “it’s a little too early” to confirm commitment to NB-IoT or other cellular LPWA technologies, but did admit the operator is monitoring developments and talking to its mobile network supplier Ericsson.

“We’re looking at it,” he stated. “We haven’t made up our mind. All options are open.”