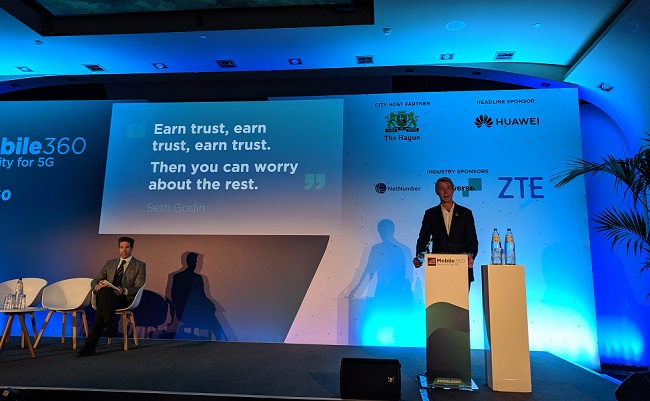 LIVE FROM MOBILE 360 SECURITY FOR 5G, THE HAGUE: GSMA director general Mats Granryd hailed “trust” as the vital component of a successful 5G industry, declaring that all parts of the mobile business have a duty to ensure that security and trust are at the forefront of future network deployments.

In a year which has seen major security breaches from online players such as Facebook and WhatsApp, as well as the blacklisting of Chinese vendors from certain countries, Granryd used his opening keynote to warn of the dangers of continuing down this path.

Granryd also hinted at the US’ decision to ban Huawei in light of perceived security threats, noting that a critical element of trust is “the trust between nations”.

“Security must be rigorous, robust and constantly evolving,” he urged, before warning that it is important to find a balance between risk and reward. “We should be wary of burdening the industry with unnecessary testing,” Granryd said, noting that “no system is ever 100 per cent secure and that human interaction, or human error, presents the greatest risks”.

Three strategies
The GSMA boss claimed there is no single solution to the challenges around security but outlined three strategies to potential success. First up, Granryd cited “collaboration” as an important ingredient: “It is critical that we work together and share best practice on what are shared security goals and often a common adversary. We collaborate on an on-going basis via working groups such as the FASG [the GSMA‘s Fraud and Security Group] which has more than 1,600 members in its network.“

Second, he highlighted the role of “cooperation” between a buyer and its suppliers, enabling trusted business partnerships. “Cooperation here means working together, having shared objectives and being as transparent as possible, particularly around security,” he said. “We must avoid becoming like the man who trusts nobody, which is the kind of man nobody trusts.”

And third, Granryd said: “It’s critical that we embed security into the culture of every stakeholder within our supply chain and in every aspect of product design….from definition to decommission. Building security into company culture and product design is what NESAS [the Network Equipment Security Assurance Scheme], that we run and oversee in conjunction with 3GPP, aims to do. It provides security assurance in the design and product testing phase. It embeds best practice.”