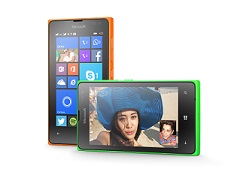 Microsoft said that “not every phone will upgrade or support all possible Windows 10 features”, after a free update for Windows Phone 8.1 users was promised last week.

“Our goal is for the majority of the Lumia phones running Windows Phone 8 and 8.1 to join the Windows ecosystem along with an expected hundreds of millions of PCs, tablets and other devices running the next generation of Windows,” Chris Weber, corporate VP of Sales in Microsoft’s Mobile Devices group, wrote.

The lack of upgrades was put down to “certain features and experiences” requiring “more advanced future hardware”.

As yet, Microsoft has not stated which devices will be upgradable, although Weber said that Lumia 435, Lumia 735 and Lumia 930 “will be able to upgrade to Windows 10 as it becomes available”.

It is perhaps the first on the list that is the most significant: Microsoft’s low-end hardware seems most likely to be unable to upgrade to the new platform, due to the limits on processor power and memory in devices targeting entry-level users.

But with Windows Phone picking up the greatest share in this lower-tier, it means that this is where the majority of its customers sit.

The reference to “certain features and experiences” not being available is also interesting, as it raises the possibility that the company will offer a stripped-down version of the platform for older and/or less capable devices – although the company has not stated this as an option.

But Engadget also noted that Microsoft had said something similar about Microsoft’s Windows RT-powered Surface tablets, which will gain “some of the functionality of Windows 10”.

The upgrade issue has picked up a significant amount of interest because of Microsoft’s somewhat chequered history with regard to offering upgrades for mobile devices.

The company did offer Windows Phone 7.8 as an alternative, although this was largely cosmetic.

Microsoft will push no-cost upgrades to Windows 10 as a way to generate momentum for the platform, something that has been lacking for its current generation Windows 8 across tablets and PCs.

The computing giant has also not detailed upgrade plans for Windows Phone 8-powered smartphones beyond its own Lumia portfolio.