LG Electronics said it had sold more than 10 million of its Optimus L-Series smartphones, a milestone it said is “proof that customers want attractive smartphones with distinctive – not “me too” – styling”.

After a prolonged period of losses for its handset unit, LG has recently seen profits from this operation, as it has finally begun to capitalise on growth in the smartphone space.

Of the most recent four quarters, it has been profitable for three, with a dip in the second quarter attributed to increased marketing costs as it brought new products to market.

While LG was for a long time one of the top-three handset vendors by shipments, this position has not always been reflected in its profitability.

From 2010 into 2011, it suffered as it looked to migrate away from feature phones – which were driving volumes if not income – to the more lucrative smartphone space.

While the company does not break-out many details of its handset business (such as average selling prices), it did state that in Q2 2012 smartphones accounted for 44 percent of unit sales, up from 36 percent in the previous quarter.

In addition to the Optimus L range, which targets 3G users, the company has also been aggressive in bringing LTE-enabled handsets to market.

In August, it said that it had sold five million LTE smartphones globally, including one million in July alone – a rate that, if maintained, means it should be nearing the 10 million milestone.

These premium products are enabling LG to generate profit from lower device volumes and a more controlled product range, as the less lucrative feature-phone business drops off.

LG’s handset activities are currently focused on Android. While it has previously announced initiatives that would have brought it closer to Microsoft – such as a 2009 agreement that would see it “bring up to 26 new Windows phones to market in 2012 alone” – it was reported earlier this year that it had cooled towards Windows Phone due to sales not being “meaningful”.

Indeed, while HTC, Nokia and Samsung have readied devices using the latest version of the Windows Phone platform, nothing has been seen from LG.

Announced at the GSMA Mobile World Congress this year, the vendor said the L-Series line incorporates “timeless design with fine details that further differentiates LG’s mobile devices from the competition”. 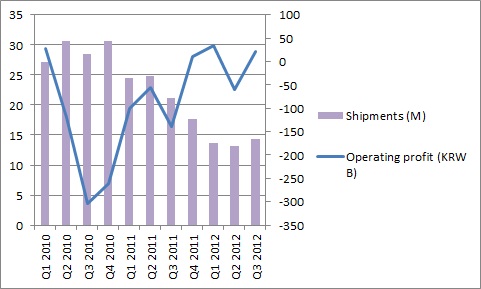