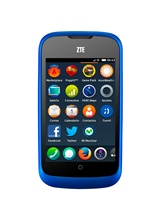 Telefonica said that – as expected – it has launched Firefox OS-powered smartphones in several Latin American markets, in partnership with device makers Alcatel OneTouch and ZTE.

The OneTouch Fire and ZTE Open (pictured) are being offered in Colombia and Venezuela, alongside tariffs which include free data allowances in the early weeks of ownership.

In a statement, Telefonica noted that a number of local content partners have “worked closely to ensure relevant local apps are available at launch” and that it and partner Mozilla will “continue to build the portfolio of local apps available to ensure customers can find what is most relevant to them”.

Yotam Ben-Ami, director of Open Web Devices at Telefonica Digital, said: “There is strong momentum building behind Firefox OS as we bring more devices to more of our markets. But this is just the beginning as the platform, content ecosystem and range of devices continues to expand.”

“There is an inherent imbalance in the smartphone market at the moment and we believe that Firefox OS represents the best opportunity to restore balance and provide a more open smartphone experience to customers,” he continued.

Telefonica, which is one of the main backers of Firefox OS, announced the launch of its first device powered by the platform in Spain last month.

TCL refreshes line up with slew of smartphones