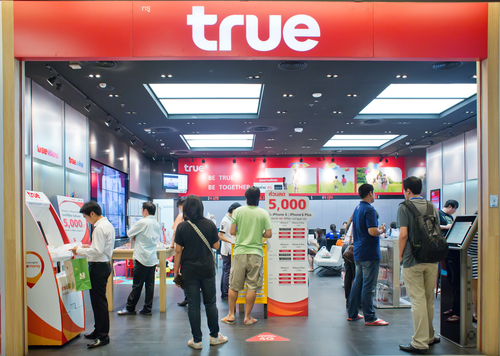 Thai telecoms operator True Group returned to profit in the first quarter of the year as its mobile business experienced strong growth on the back of gains in prepaid and post-paid subscribers.

Overall service revenue in the recent quarter grew 4.1 per cent to THB25.8 billion, fuelled by a 7.6 per cent increase in mobile service turnover to THB19.1 billion. Equipment sales fell 14.8 per cent to THB3.28 billion.

Targeted promotions
The operator said its targeted campaigns and efforts to strengthen its sales channels boosted revenue and subscriber growth in both post-paid and prepaid segments.

It reported 2 million net mobile additions year-on-year to end March with 29.6 million subs, of which 7.7 million were post-paid and 21.9 million prepaid.

Last week, market leader AIS reported a 5.3 per cent drop in Q1 net profit to THB7.62 billion, which it said was mainly due to higher network, depreciation and amorisation costs. Total revenue increased 7.1 per cent to THB43.8 billion, driven in large part by a 7.8 per cent increase in device sales.

Mobile revenue inched up 1.1 per cent to THB31.6 billion.