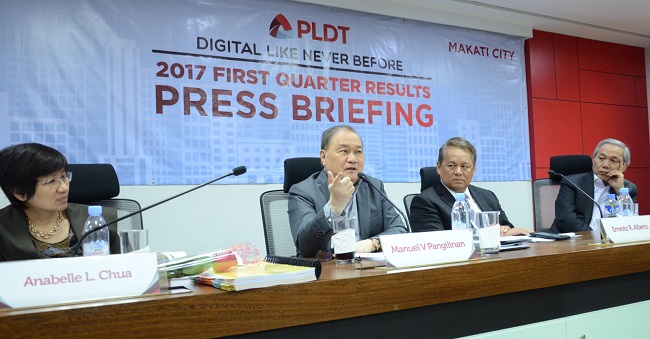 Philippines telecoms operator PLDT posted another quarterly drop in profit as mobile revenue continued to decline in Q1 2017, but brisk growth in its home and enterprise units created optimism for a return to growth later this year.

The operator’s net profit dropped 20 per cent year-on-year to PHP4.95 billion ($101 million). Total revenue during the quarter fell 8 per cent to PHP39.2 billion, while service revenue was down 7 per cent to PHP37.7 billion.

Manuel Pangilinan, chairman and CEO of PLDT (pictured, centre), said: “As we indicated earlier, our focus since the latter part of 2016 has been to stabilise the overall business, which involves stemming the decline of revenues and profitability in the wireless consumer segment, sustaining the upward momentum in the home and enterprise businesses and laying the ground for recovery through the digital transformation of our businesses.”

He said the operator produced encouraging results in the first quarter “thanks to the continued strong growth posted by our home and enterprise businesses, whilst our wireless consumer group redoubled efforts to break the negative momentum and hold the line”.

Mobile service turnover decreased 16.6 per cent per cent to PHP21.1 billion, while its wireless consumer group saw service revenue drop 18 per cent year-on-year to PHP14.7 billion due to declines in SMS (20 per cent) and voice revenue (26 per cent).

The combined revenues of the home and enterprise groups accounted for 46 per cent of total service revenues, while wireless consumer business contributed 41 per cent. Fixed-line revenue increased 8.8 per cent to PHP15.5 billion.

Data and broadband revenues grew 10 per cent year-on-year to PHP15.9 billion and comprised 44 per cent of consolidated revenues.

Pangilinan said sequential comparisons of service revenues, EBITDA and core income suggest: “we are levelling off from our descent path, and are at the threshold of returning to the growth track in the second half of the year”.

He noted going digital is the difficult, but only, viable path to growth. “It is thus with watchful optimism that we are maintaining our guidance for full year recurring core income (before exceptionals) at PHP21.5 billion.”

PLDT pushes back Voyager turnaround to 2024