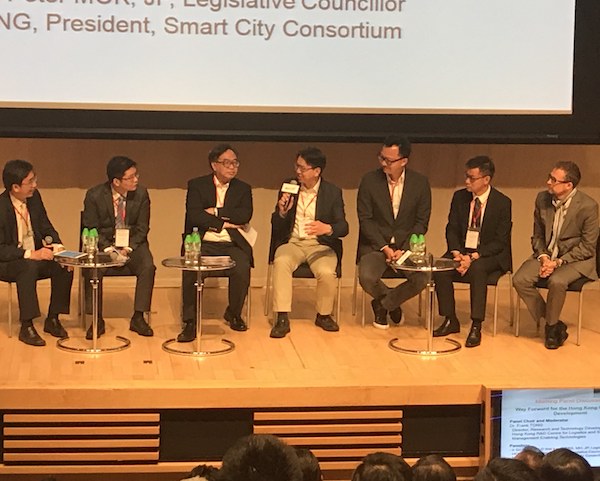 UPDATED 18/4 – LIVE FROM HONG KONG ELECTRONICS SYMPOSIUM: Charles Peter Mok, a legislative councillor in Hong Kong, pointed to transport as the smart city sector with the biggest potential to improve people’s daily lives, but also the area where the territory is far behind other regions.

Mok (pictured, centre) argued a smart city is all about data, so since the government holds the largest amount of information in the transport sector compared with other smart city areas, mobility offers the most potential and will be the easiest to address: “But it’s also an area where we are most behind,” he said.

The event, themed Smart City: From Cliche to Digital Transformation, was organised by the Hong Kong Institute of Engineers.

“Every city will take a different path – a shorter path or a longer one. We have started late, but I hope we can catch up,” Mok said.

Lo Wai-kwok, another legislative councillor in the territory (pictured, third from left), drew a laugh from the audience when he said he thought smart government was the most important initiative for the government to push: “We have to do better to turn Hong Kong into a smart city,” he said.

Lag
Leslie Wong, assistant VP of strategic technology and projects at HKT, highlighted the gulf between Hong Kong’s systems and those of other cities in the region.

In a presentation, he noted Singapore installed its first electronic road pricing (ERP) system in 1998 and will upgrade to ERP 2.0, a GNSS-based system, in 2020. In contrast, Hong Kong still uses toll plazas to collect payments, which makes it impossible for the city to deploy congestion fees in specific areas. The first commercial ERP for auto tolling in Hong Kong isn’t scheduled until 2021.

Mok said money alone will not be enough, noting Hong Kong also needs policy changes to streamline processes, help government agencies adopt new technologies and support ICT education. In November 2017 the government announced the injection of funds to boost R&D and infrastructure as well as steps to encourage start-ups as part of its smart city blueprint.