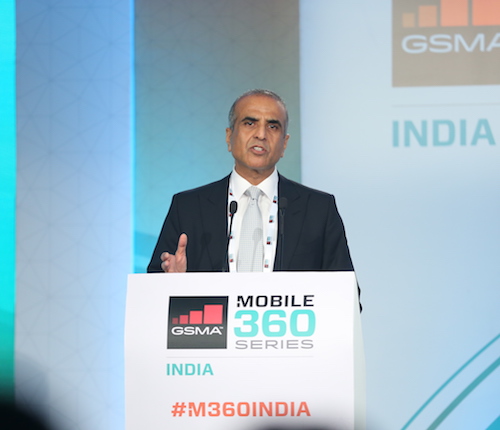 LIVE FROM GSMA MOBILE 360 INDIA: India’s mobile operators have waited a long time for the government to formulate a clear spectrum roadmap, but the wait is over now that the government’s reform agenda is materialising, Bharti Airtel chairman Sunil Mittal said in his keynote this morning.

“The industry waited more than a decade for path-breaking measures to be taken by the government, but they eventually came and they came in pretty fast. Spectrum sharing, spectrum trading and a large amount of spectrum was finally put up for auction, taking India from being a very spectrum constrained industry to being a spectrum surplus environment,” Mittal said.

As spectrum is the lifeline of the mobile industry, he said local operators have always watched in envy as western powers have been able to manage, harmonise and use spectrum for the benefit of their nations.

“India has finally done that and I must compliment the minister [communications] and secretary [DoT] that today we have almost all the spectrum that is required in the commercial space,” said the chairman of India’s largest mobile operator.

But he noted the sector wants to see spectrum prices reduced. “As an industry, we’d like to see this vital resource out in the base stations rather than with the government because it has a multiplier effect. It can move the economy, it can create momentum in the economy.”

He expects the government to continue with its reforms, as operators need more and easier right-of-way and more affordable spectrum from time to time, so the industry can move to the next level of technology.

Economic impact
The mobile industry contributes about 6.1 per cent of India’s GDP, or $135 billion, and by 2020 it is estimated it will contribute about 8.2 per cent to the economy. The mobile industry through various taxes helps support the government’s agenda in many social programmes, such as education and rural development, he said.

Now 94 per cent of India’s population has access to a mobile signal, after operators spent $52 billion on spectrum in the last five auctions.

India, which has shown the benefits of scale, is the most affordable telecoms market anywhere in the world, where prices of feature phones have fallen to below $15 because of industry collaboration led by the GSMA, Mittal said.

He called on global technology leaders to step up their investments, both in services and in manufacturing in India. By 2020 the country will be importing more than $500 billion worth of hardware. “This is the single most important segment – we need to manufacture in this country.”

The next ten years, he said, will be very different from the last 10 years, and the industry has a responsibility to ensure the “benefits of technology are passed on to society in the fittest way”.