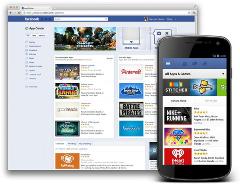 Facebook announced the official launch of its App Center, which it describes as “the place for people to find great social apps on the web and mobile.” So far, however, its reach is limited: it will only be available to US customers, offering a catalogue of “over 600 apps.”

The store supports apps for the Facebook.com website as well as Android and iOS titles. Customers can send mobile apps to smartphones from a PC, and when downloads are necessary users are redirected to Google Play or Apple’s App Store.

Facebook said the store “lists apps based on quality signals from users.” It suggests developers keep their detail pages up-to-date even if their product is not listed, because it will still appear in searches for users who do not have it installed, and listing will be automatic once it reaches a quality threshold.

The App Center webpage features selections of recommended apps, trending apps, top rated and top grossing. It is currently dominated by well-known titles such as Draw Something, Pinterest and Nike+ GPS.

Developers can view the status of their apps via an App Dashboard.

In a developer blog post, Facebook said it will provide more detail on localisation tools and international availability of the store in the coming weeks.