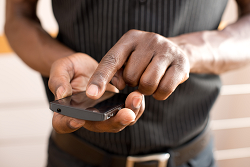 Juniper Research forecast revenue from mobile money transfer services will double to $4 billion in 2018, from $2 billion this year.

Africa is the leading region for P2P, or mobile remittance, payments. As evidence, the research firm points to several operators – including Vodacom Tanzania and MTN Uganda – generating more than 10 per cent of total revenue from the activity.

The success of Kenya’s Safaricom and its M-Pesa service, which generates $330 million in annual revenue, is the most notable achievement.

Surges in transaction volume and value are driven by increased interoperability, both cross-border and intra-national level, the report says. The research cites traffic uplifts from deals between Safaricom and MTN in Rwanda, as well as domestic agreements reached in Tanzania and Pakistan.

The research said operators are future-proofing their mobile money strategies by developing smartphone apps, alongside USSD and IVR-based services.

Among all the optimism, Juniper does sound a note of caution: where adoption or activity rates are low, the cause is often poor marketing, either inappropriate or badly targeted.

Operators trying to grab easy profits also comes under fire from the report. For instance, a number of operators in Nigeria failed to attract repeat business because of high cash-out fees. In other countries, savings accounts had withdrawal fees that were inappropriate for lower income users or savers.