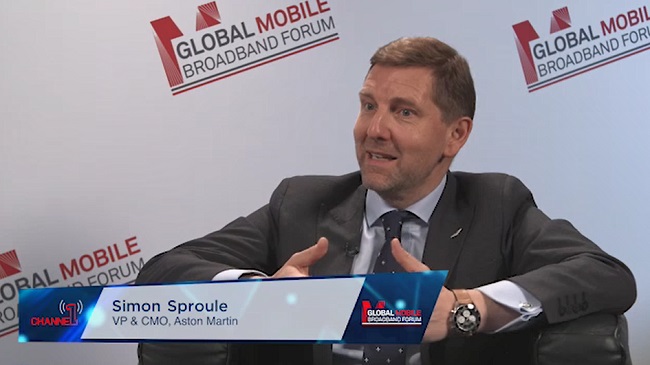 PARTNER FEATURE: Driven by emerging technologies, the automotive industry is undergoing a seismic shift, making the interaction between car companies and tech companies one of the key developments of the 5G era.

5G will hasten the arrival of autonomous vehicles (AVs), with current predictions holding that L5 – or fully autonomous capabilities – will arrive by 2030. When high-automation L4 capabilities are mature in 2025, Gartner believes that AVs will send 1 TB of sensor and vehicle and sensor data to the cloud per month. And when it comes to carrying that data, Simon Sproule, Vice President and Chief Marketing Officer at high-end car manufacturer Aston Martin, says that, “5G networks will play a crucial role in handling the massive amounts of data generated by AVs and their users for all kinds of purposes, including safety, connectivity and entertainment.”

Next-gen vehicle experiences
With a latency of 1 ms and the ability to process massive amounts of data, 5G will support mission-critical functions such as cellular-vehicle-to-everything (C-V2X) capabilities. Smart, connected, automated, and autonomous driving will require a failure proof, robust, and omnipresent wireless network that has extensive coverage, high data transfer speeds, ultra-low latency, and ultra-high reliability.

The speeds and data processing capabilities needed to mimic the timing of human reflexes are incredible. The emergence of 5G will transform the automotive industry’s business models, enabling a whole new level of safety where vehicles would be exchanging information about roads, speed, the vehicle’s condition, and more in real-time.

The high bandwidth and low latency offered by 5G means that this connectivity platform is going to “enable everything that’s going to help the auto industry transform,” says Sproule. He identifies four big change factors that’s happening in the industry: connectivity, autonomy, electrification, and shared mobility. “What we’re seeing is a sort of Detroit meets Silicon Valley, and tech companies and car companies coming together. And you’re seeing partnerships that you couldn’t have imagined just 10 years ago,” he says.

Sproule views cars as a mobile device that will increasingly become a tech-enabled connected mobile device, “We’re past the point of ‘is it going to happen?’ Now it’s more about how technology companies play into the car space, and how car companies protect some of their real estate. It’s a very interesting period in our industry.”

Groups such as the 5G Automotive Association, a consortium of companies that helps develop C-V2X and counts Huawei among its founder members, are already working to deliver end-to-end solutions for future mobility and transportation services. For a number of years, Aston Martin has had a technology relationship with Daimler, another 5G Automotive Association founder. This gives it access to resources that would not be available to a boutique car maker on its own, particularly as the industry goes through such a broad set of tech-led evolution.

Bits-and-bytes chauffeur
For car manufacturers, connected car services will be adopted by all manufacturers from mass market to premium but, according to Sproule, “What’s interesting is what’s going to differentiate connected car technology in luxury cars versus the mass or premium market.” And within Aston Martin’s own portfolio, there will also be differences in how technology will be applied.

He adds that, “We’re selling a product that you don’t need, but you want, so this is about desire. And I think the question that we’re asking ourselves is what does autonomy look like in the luxury space?”

With Aston Martin’s core proposition built on sports cars that offer a high level of driving involvement and enjoyment, increasing the use of technology – and particular autonomous driving – beyond some key driver and safety aids would be detrimental to its central ethos. “We don’t see Aston Martin as a leader in full autonomy, because that sort of defeats the purpose of buying a sports car that you want to drive yourself,” Sproule says.

The executive suggests that while autonomy and driving experience aren’t a natural fit, some specialised opportunities still exist. “Why couldn’t the autonomous driver show you the best racing line around a race track? Autonomy predominantly provides, you know, safety, stress-release in urban congestion and so forth. But autonomy has another play in our space, which is how it can actually enhance the driving experience”.

But also in the portfolio is the Lagonda brand. In May 2018, plans were announced to offer a “radical, sector-defining, zero emission SUV” wearing this badge, with a scheduled unveiling in 2021. The intention is to stake a leadership claim with a “first of its kind, ultra-stylish, supremely luxurious, fully electric emission-free vehicle”, the company said at the time.

Sproule adds that, “We look at Lagonda as being very much a car that could be in a leadership position in autonomy.” With a focus on luxury rather than driver involvement, it’s the type of vehicle that could end up being chauffeur driven, “With autonomy, you don’t have to have a carbon-based chauffer, you have a bits-and-bytes-based chauffeur”.

Electric drivetrains will also play a greater role in Aston Martin’s future, with the company in 2018 stating that its facility in St Athan, Wales, will be its center for electrification. Its first all-electric product, Rapide E, will begin production next year, with the aim of creating, in Sproule’s words, “A highly-desirable electric vehicle with the levels of performance expected of an Aston Martin”. 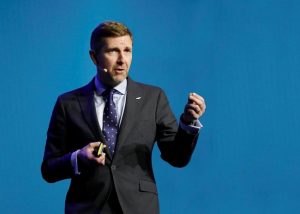 There are still plenty of challenges faced by the automotive industry that aren’t replicated in the tech space, the most obvious of which is time to market. In his keynote speech at Global MBB Forum 2018, Sproule said that while technology has enabled production cycles for cars to become shorter, the time taken to design, test and produce new vehicles is still measured in years. The complexity of current car designs, combined with the need to refine designs to meet expected future customer demands, and extensive government safety test requirements, mean it can take three to four years for a new car to move from the drawing board to the factory floor.

In contrast, consumer electronics devices are developed quickly, updated when in the market, and have a rapid replacement cycle, meaning new technologies can be rolled out and adopted quickly.

For high-value vehicles such as the Aston Martin line, there is also a buoyant used market, meaning a large proportion of cars end up as well looked-after classics, long after other cars have gone to the scrapheap. This means that cars have to be designed with a use time measured in decades, and while by definition classic cars don’t need cutting-edge technology, they do need to stay usable. Once sold, the average expected lifetime of a car is ten to fifteen years. As a result, automakers must look ahead when it comes to designing connectivity into their cars, making sure that this connectivity will not just help differentiate the car when it’s introduced, but also continue to provide connectivity over the car’s entire expected life.

“When you develop a car today, it still needs to be relevant and useful to the consumer in ten years. So technology will play an increasing role in ensuring our cars can be updated and remain technologically relevant,” Sproule says.

This requires, for example, the adoption of software platforms that can be updated over-the-air once a car has been sold, and support for connectivity platforms which will have a long lifecycle.

And another challenge, says Sproule, is how to plot Aston Martin’s adoption of new technology, at a time where customer awareness and demand is at a low level – but increasing rapidly as time passes. “You know you have to try and get into the head of the consumer, but often the consumer doesn’t know what they want.”

Automakers who don’t integrate 5G into their cars will not be able to take advantage of the latest car-to-car or car-to-infrastructure communication technology, potentially slowing down their ability to offer new partially autonomous driving services. Though the need might be less urgent, there usually comes a time when industries need to embrace evolutionary innovations or risk falling behind the competition. For automakers and 5G networking technology, that time is now.

Cloud and 5G bring the reality to AR and VR