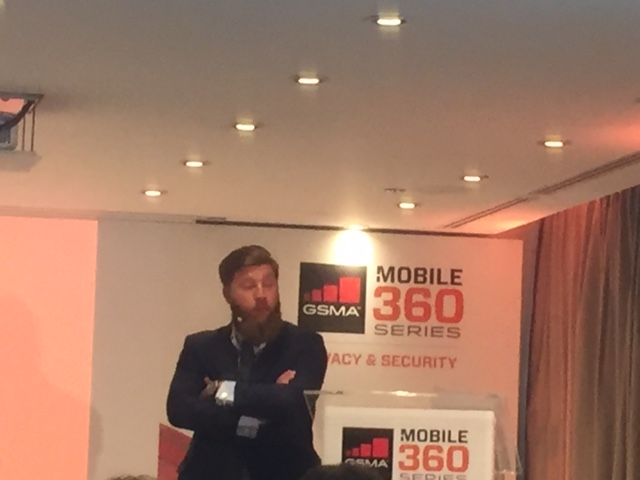 LIVE FROM GSMA MOBILE 360 – PRIVACY & SECURITY, THE HAGUE: Voice calls are often missed as being part of data by governments and firms when it comes to security, said Oliver Blower (pictured), CEO of VoxSmart, a company that specialises in mobile voice recording.

There are two billion corporate devices issued in the UK and only 200,000 of them secure voice and SMS, while 750 million secure data and content using EMM/MDM technology, Blower (pictured) claimed, adding that VoxSmart wants to close this gap.

“No one is thinking about calls”, he said, even though when it comes to security of a company, almost all transactions start and end with conversations.

What VoxSmart does is put a “compliance cloak on a device”, recording everything an employee says, so companies are able to save themselves from reputational damage and fines, proving themselves innocent if need be.

He said his firm goes to “the nth degree” to ensure voice calls they store are as secure as can be, from both a legal and technical point of view.

Cyber crisis damage
Meanwhile, Mark Seifert, partner at an advisory firm called Brunswick, admitted that while companies don’t get extra credit for having a top-notch security system, the cost of customer data leaking is very high.

He said a cyber crisis is “like no other crisis,” with it being impossible to determine just how much damage has been caused.

In a global survey by Brunswick, three out of four customers equated losing data with concerns over job security, the economy and even terrorism, results he found “shocking”.

Since the session here at The Hague event was called ‘Security as an Investment: The Case for the CFO and Chief Counsel,’ he explained ways in which top executives of a company can be convinced to invest in security.

For one, a security beach can have a lasting impact on a company’s valuation that is hard to recover from. What’s more, it will negatively influence brand reputation, with “likeability” of a brand drastically falling, along with losing customer trust.

He also said it is not just about spending money on the right technology but educating employees on the importance of security, training them and increasing their awareness to minimise risks. Additionally, CEOs must know how to deal with customers and the media if a breach does occur.

According to Evelyn Tjon-En-Fa, a partner at law firm Bird & Bird, the CEO of TalkTalk handled a data leakage badly, making some crucial mistakes she deemed disastrous: for instance, not coming out publicly with details until 24 hours after the incident and down-playing the impact the leak would have.

She quoted a World Economic Forum survey that said €500 billion would be lost every year globally if cyber attacks and data fraud were not dealt with.