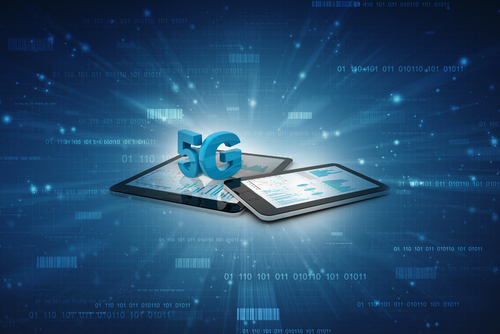 The upcoming 5G network can provide an uplink bandwidth of up to 20 Gbps, a downlink bandwidth of 10 Gbps, a low latency of 5 ms, and 1 million connections per square kilometer. These powerful capabilities will revolutionize mobile communications and people’s daily lives, while accelerating digital transformation across all industries. Network development is largely based on the emergence and promotion of various new applications. We heavily anticipate the advent of 5G and eagerly await the introduction of world-changing applications. 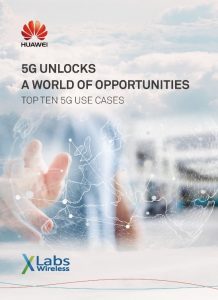 At the Global Mobile Broadband Forum 2017, Huawei Wireless X Labs released the white paper Top Ten 5G Use Cases (hereafter referred as the white paper). This was the inaugural event that Huawei described 5G use cases intended for the industry. These use cases are expected to be primarily launched in the 5G era to proactively promote the progress of 5G.

The white paper focuses on two dimensions, analyzes potential 5G use cases, and provides a ranking of top ten 5G use cases. The first dimension is the relevance of 5G technology in terms of these promising use cases. This relevance specifically identifies the requirements for network bandwidth and latency from diverse potential use cases. For example, cloud VR/AR has the most stringent network requirements regarding bandwidth (a maximum bandwidth of 9.4 Gbps) and latency (under 5 ms) to ensure a superior user experience. At present, only 5G is capable of making cloud VR/AR a reality. The second dimension focuses on market potential which is demonstrated by the market space created for operators and vertical industries. Market potential is an increasingly important aspect and a significant driving force behind service growth. Cloud VR/AR is expected to create a market space of US$292 billion by 2025, and is well-positioned to produce unlimited opportunities for both operators and vertical industries. 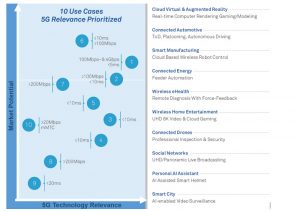 Additionally, the white paper analyzes business models of each use case, which is critical to business development. For example, cloud VR/AR involves three business models. First, advertisement, in which users pay to enjoy VR content and advertisement companies pay VR platforms for endorsing services. Second, subscription-based payment, in which users pay VR platforms who then share revenue with content producers. Third, usage-based payment, in which users pay by usage or download and platforms share revenue with content producers. Different companies can select business models that suit unique business development demands. No matter which model is adopted, users no longer need to purchase expensive processing devices. Instead, the purchase of VR/AR terminals and content is all that is required. This helps to significantly reduce cost and promote the proliferation of such service.

According to the white paper, 5G networks can lead to the realization of diverse use cases, such as UHD live broadcast via VR/AR, autonomous driving, Tele-Operated Driving (ToD), wireless eHealth, wireless smart home, and personal AI devices.

From 2G-based voice and short messages, to 3G-based data services, and to 4G-based smooth video experience, the arrival of each new generation of communications technology has transformed people’s lives. 5G is more than a leap in technology, and will trigger a revolution in social productivity and daily life, ushering in a new era boasting connectivity of everything. With the release of the white paper, we have successfully embraced greater imagination and higher expectations for the future of 5G. Smart city, connected drones, ToD/autonomous driving, smart manufacturing, wireless eHealth, and many other innovative 5G use cases will help clearly define our dreams for a new reality of tomorrow.