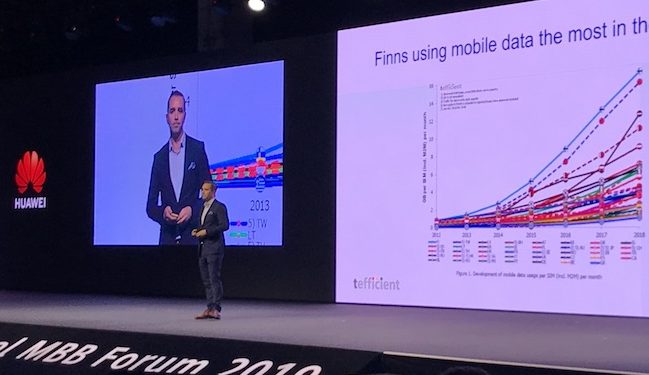 The Finland-based mobile operator, which launched 5G service in April, has 1,400 cell sites per million people and nearly 400MHz of spectrum in the 3.5GHz band, which Lehtinen said gives it the highest 5G frequency per capita in Europe.

Elisa offers three speed-based pricing tiers, ranging from €32 a month for 300Mb/s to €50 per month for 1Gb/s.

“We see growing demand for fast, reliable and high-quality connectivity,” he said, noting that as availability of higher-speed service increases, Elisa sees a corresponding rise in usage.

He cited data showing Finns consume the most mobile data in the world, with typical monthly usage at about 16GB in 2018, and 36 per cent of households on mobile-only broadband packages.

The move to intelligent automation of network planning and optimisation resulted in 86 per cent of network faults being solved before customers become aware of them, he said.

Lehtinen claimed Elisa runs the most automated network in the world, with capex driven by customer need-based analytics.

Paving the wave for jump in 5G cell site requirements