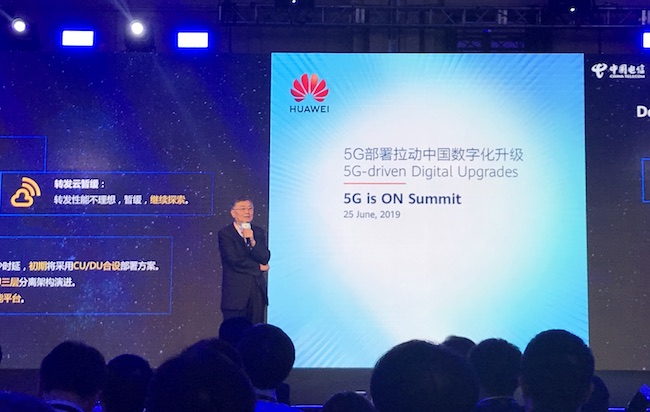 LIVE FROM MWC19 SHANGHAI: The speed of 5G deployment depends on several factors, but the strongest driver appears to be international and national competition rather than a strong business case, lamented Wei Leping, chairman of China Telecom’s Technology Steering Advisory Committee.

Wei, speaking at a Huawei partner event, warned: “We don’t want a so-called arms race to drain our resources. 5G should be a platform for economic development and the motive for 5G development instead of a means for national competition.”

Other factors pushing deployments include the pace of innovation and specification development, the price of handsets and the revenue opportunity.

In terms of gaining revenue from new services, which is the most important factor, he said: “Sadly, the three major carriers in China, as well as carriers all over the world, have tried for a dozen years, but we are still looking for a successful business case.”

eMBB focus
Since only 3GPP Release 15 is mature, he noted operators can only rely on 5G to support enhanced mobile broadband.

And without reasonable prices for 5G smartphones, he said the speed of 5G network development will be slowed. “With high handset prices, it will be difficult to count on terminals to drive network deployments.”

China Telecom will embrace the standalone (SA) architecture to realise the potential value generated by 5G such as ultra-low latency, he said, adding “Non StandAlone can’t help us achieve that function.”

It’s likely the operator will move to SA on both its core and radio access network in 2020, meaning the lifespan of non-standalone will be pretty short, he said.

Compared with 4G, he noted the ecosystem of 5G is more inclusive, with operators keen to cooperate with other verticals, such as public security, the auto industry and smart manufacturing.

“We hope we can involve more stakeholders from across various sectors so we can all enjoy the dividends 5G will bring.”