AT&T gears up for LTE-M roll-out 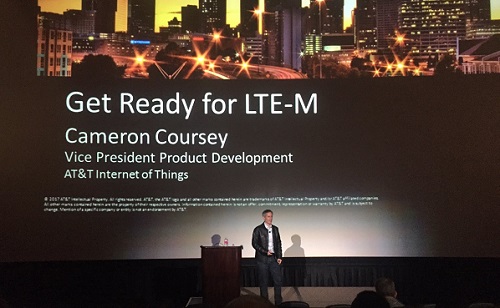 LIVE FROM CES 2017, LAS VEGAS: AT&T pledged to launch its nationwide LTE-M network “as fast as possible in 2017”, while revealing it could potentially extend the roll-out to neighbouring countries Canada and Mexico.

Speaking at its annual developer summit here in Vegas, Cameron Coursey, VP of product development, said the majority of the low power wide area network (LPWA) for IoT services will be built by Q2, and its attention was firmly on launching commercially.

As part of the company’s mobile unlimited plan, it offers no roaming charges in Canada and Mexico. Coursey said it was “still figuring out” whether a similar option could be offered for its IoT network, but highlighted the differences in infrastructure in both markets, and “where they are in their roll out plans”.

Offering more details on its go to market strategy, Coursey said the company would not get involved with the specifics of IoT applications, but will focus on providing connectivity.

He also steered clear of revealing exactly how the service will be offered to its customers, and whether it will be added to existing bundles.

LTE-M is one of three LPWA technologies backed by standards body 3GPP, along with NB-IoT, which has proved popular with operators in particular, as well as EC-GSM IoT.

The three technologies are however rivalled by unlicensed offerings, such as the networks offered by Sigfox and the LoRa Alliance.

Coursey used his presentation at the event to further tout the benefits of using licensed technology, over unlicensed offerings, insisting a standardised offering offered a one stop shop for the technology to develop worldwide, while also holding the advantage in terms of coverage, security, and dedicated spectrum.

Open for business
Industry body GSMA, which has worked with operators on promoting the benefits of cellular LPWA, also took to the stage, and said security was now vital as the networks move closer to commercialisation.

Senior technology director Carlos Bosch further echoed Coursey, stating 2017 was the year that LPWA networks “are open for business” across the globe.

AT&T rival Verizon Wireless switched on its own LTE-M networks in limited markets at the end of last year and says it is on track to go nationwide by the end of this first quarter.