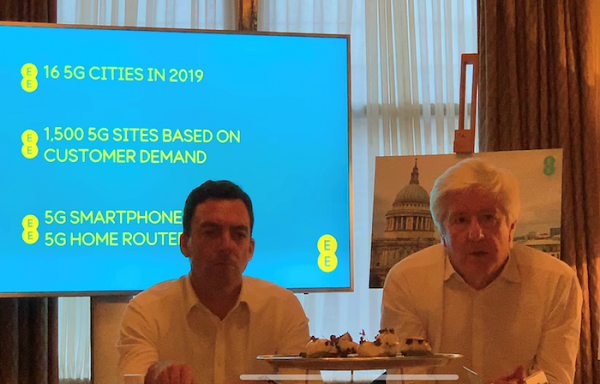 BT consumer CEO Marc Allera (pictured, left) expressed confidence the UK will emerge at the forefront of 5G following a number of missteps in 4G, as the country’s mobile market leader EE revealed plans to launch the next-generation technology in 16 cities in 2019.

Allera explained the initial rollout will focus on providing 5G coverage “in the busiest areas of the UK’s busiest cities”, based on the number of customers that connect in certain places and how much data is being consumed on its existing 4G networks, a strategy he described as “demand-led”.

EE will initially upgrade 1,500 sites, “significantly less” than 10 per cent of its current portfolio, but accounting for 25 per cent of total network demand and covering 15 per cent of the UK’s population.

With a relatively small rollout, Allera said he is not expecting “mass adoption in the first year”, but anticipates early adopters will pay a small premium for a “faster and better service” on the initial launch.

Technology choice
EE, which is aiming to be the first in the UK to launch 5G, will provide both mobile and fixed wireless access 5G in 2019, although Allera said the company is “still wrestling” with which will come to market first.

The executive, however, maintained that “mobile remains at the core of what we do and what our customers want”, while stressing the need for 5G to be developed with other technologies in mind, including an ever-developing 4G, Wi-Fi and fixed access.

He also said the company will provide a comprehensive update on its 5G plans when it reveals its device roadmap over the coming weeks and months. The company is working with a number of smartphone vendors and expects to have “multiple 5G smartphones” available at launch.

Rivals
Despite EE and Vodafone UK jostling for a 5G lead in the UK, rival 3 UK last week revealing it is also targeting a launch in 2019, the country is still expected to fall behind the US and leading Asian countries on deployments.

Allera said even if that is the case, “we are not going to be that far behind”, in part due a concerted effort across the industry to up its game on 5G following experiences with 4G.

“I think the impact of being late to 4G as an industry was felt quite acutely,” he said. “It’s hard to put an exact figure on it, but there is an industry understanding as a country that we need to be at the forefront of it. The government and all the stakeholders understand the importance of having a brilliant infrastructure for the UK. There is a greater understanding, awareness and a greater consistency of vision from government and regulators than there was at 4G.

Allera added noise around 5G in the UK was a good thing and particularly important for the country, but expressed confidence EE’s strong 4G foundation will keep rivals at bay.

“It is important to stress that 5G is built on a 4G foundation and we have the best foundation there is.”